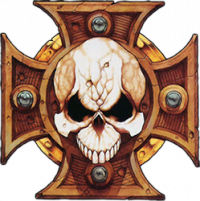 The Crux Terminatus is a stone medallion awarded to highly skilled and experienced Space Marine Veterans. All members of a Chapter trained in the use of Terminator Armour will have been first awarded the Crux Terminatus. These badges, set into the left shoulder plate of Terminator armour, are highly distinctive and usually fashioned from stone. In Codex Chapters, members of the chapter's veteran First Company are the exclusive users of Terminator armour.[Needs Citation]

This Honour appears most commonly as a skull set onto a cruciform shape of red iron or bone. Terminator sergeants often add crossed bones behind the skull, whilst lightning bolts behind the skull are often added for Terminators trained as Assault units wielding lightning claws and thunder hammers with storm shields. Variations include the size and dimensions of the skull and the removal of the crossed lightning bolts or bones or their scale in relation to the shape of the cruciform. The Crux Terminatus is almost always worn on the left shoulder pad, though it may also be worn on one knee pad (this is usually done only in combination with the shoulder pad, however). Legend has it that the first Crux Terminatus ever crafted contained a tiny fragment of the Emperor's own armour within it. Whether or not this is true it means that ancient suits of power armour bearing Terminator Honours are considered even more rare and precious to a Chapter as a result of their reputed connection to the Master of the Imperium.[1]

Acts of extreme valour among wearers may be rewarded by the replacement of the standard badge by the Crux Argentum - a Terminator badge made from silver and encrusted with gems.[Needs Citation]

A Terminator Captain is among the most highly skilled and experienced warriors humanity has ever produced. In recognition of their achievements, these Marines are allowed the honour of wearing a distinctive badge that incorporates fragments of the Emperor's Armour. During his struggle against Horus aboard the Vengeful Spirit at the climax of the Horus Heresy, the Emperor was aided by a squad of Terminators from the Imperial Fists chapter. In recognition of their act of valour, the mortally wounded Emperor ordered that his own suit of armour be taken off and melted down, and its shards incorporated into badges that all Terminator Captains should wear. Therefore all efforts are made to recover the suits of Captains killed in action as the loss of such a relic brings great dishonour to the squad and the Chapter.[Needs Citation]

They vary from chapter to chapter; among the Space Wolves, for instance, the human skull is replaced by a wolf skull; or by a sword among the Deathwing of the Dark Angels.[2] While only the most precious Cruxes of most Chapters contain a shard of the Emperor's Armour, all those used by the Grey Knights have such an honor.[3]