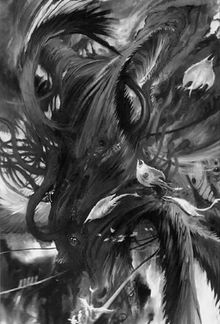 The Maze of Tzeentch

The Crystal Labyrinth is a maze within the Warp that are spread across the domain of the Chaos god Tzeentch and its presence is felt by all within the Daemon realms.[1]

The Crystal Labyrinth sits upon an immense iridescent plateau and consists of evershifting crystal avenues and glitter in every colour. Within the labyrinth sit hidden pathways that are forged from lies and deceit which link to domains of the other Chaos gods thus linking the fractious Realms of Chaos. At the very heart of the maze of corridors sits the hidden and majestic Impossible Fortress and Hidden Library.[1]

Though a Daemonic realm, the Crystal Labyrinth lacks any warrior guardians but instead uses its illusionary passages as a deterrent to any intruders that are not strong of mind. The corridors reflect not only light but also dreams, hopes, misery and nightmares which it distorts in order to pull the aspirations of any travelers to the point of driving them to despair as well as insanity. This location within the Warp is driven by the unconscious schemes of the Master of Sorcery and share Tzeentch’s nature as the Crystal Labyrinth constantly moves as well as rearranges its internal structure. As a result, some of the passage ways can suddenly turn into a dead-end at the whim of Tzeentch and can lead any travelers being lost for eternity. Once trapped within the maze of corridors, beings can end up wandering where their minds are broken and dreams shattered due to their failed ambitions.[1]

There is a hidden path within the Crystal Labyrinth which is said to lead to infinite knowledge, connected by nine golden gateways three times the height of a man. This path is protected by a being known as the Guardian of the Maze. He asks a riddle at each gate, and those who answer correctly may pass through while those who fail are doomed to wander the maze for all eternity. It is said that only one has answered all nine riddles and advanced, appearing as a young girl with a small black dog.[2]