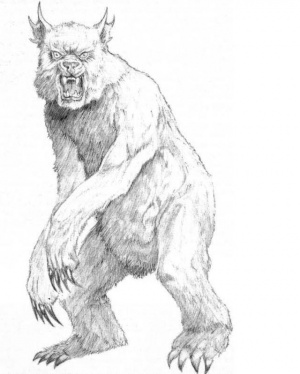 The Cudbear is native to the Death World of Cthelle. Aside from its long claws, teeth and shaggy purple hair the Cudbear looks much like a traditional Terran bear. Its thick fur is particularly adept at protecting the creature from the cold and wet environment of the planet's temperate forest and mountain regions. A natural predator, the Cudbear is extremely dangerous and territorial. It has been known to attack large groups of individuals, even heavily armed individuals, who may wander near its home.[1]

Authorities on Cthelle have reported a few known incidents of the creature climbing aboard out-going spacecraft in search of food and massacring the crews.[1]