Symbol of the Culexus Temple 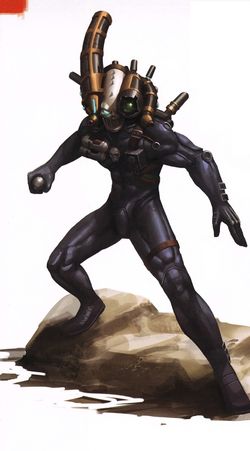 The Culexus Temple is one of the temples of the Officio Assassinorum. Psykers are their exclusive targets.

"That which is unseen and unknown always commands the greatest fear."
- Dictatus Culexus[6]

The Culexus Assassins are the most sinister, feared, and hated of all Imperial Assassins. They are null-entities in the warp, and their unnatural lack of a presence inspiring a sense of unease even in non-psykers. To psykers their mere presence is terrifying, invoking panic. In the confusion caused by this fear, the assassin can move in on its target and eliminate them. To purely psychic entities like daemons, they are invisible.[2c]

The Culexus Assassins possess the "Pariah Gene", making them for all intents, "soulless," accounting for their lack of warp-presence. This gene manifests itself very rarely, in a single individual among a billion, or more. This extreme rarity, coupled with the inevitable losses during training, makes the Culexus assassins the rarest of all Imperial assassins.[1] The Culexus temple is known to hunt down and recruit these Pariahs but also to vat-grow them. Due to the nature of being parentless, combined with the pariah gene making them seem soulless, these Culexus struggle with social interaction. Whilst able to mimic predictive human behaviour of a character they are playing as part of a mission, they may not actually feel emotions.[3]

The location of the Culexus temple is a closely guarded secret, said to be located on a planet which orbits no sun, and which is beyond the reach of the Astronomican.[2a] The Eldar, whose leaders are usually psychics, fear the Culexus greatly. Farseer Alladrios Kulcassian of Craftworld Alaitoc coordinated a centuries-long effort to locate and destroy this temple. Somehow he discovered the location and dispatched the Legacy of Eldanesh, a Shadow-class cruiser. However, using his precognitive powers, he discovered to his amazement that the temple's destruction would lead to the Annihilation of Alaitoc. Choosing the lesser of two evils, he re-called the cruiser home.[1]

The Culexus Assassin slays his foe by using a deadly psychic blast directed through an ancient device known as an Animus Speculum. It is not fully known how this device functions, but it is speculated that the warp energy separated from its targets by the null aura of the Culexus is held in this device and then unleashed. Indeed, the weapon becomes more and more potent in the vicinity of psykers. The device fires bolts of negative psychic energy and drains the power of nearby psykers to bolster its power. Secondly, the Culexus carries an Etherium, a device that induce enormous distortion and confusion in all nearby enemies, psychic or not. Combined with the fact that the enemy is already disconcerted by the soulless Culexus, the Etherium makes the Culexus impossible to target.[2b]

Culexus assassins also make use of Psyk-out grenades, which are devastating to psykers, but do nothing to those without psychic potential. The grenades utilize a substance that is said to be a by-product of the constant workings of the Golden Throne itself.[2b]