The Cult of Strife are a Dark Eldar Wych Cult.

The Cult of Strife has become the most powerful Wych Cult of all, largely due to the sublime talents of Her Excellence, Lelith Hesperax. Not through martial coups or treacherous politicking has the Cult of Strife risen to the apex of power, but through the creed of speed over strength, and the elevation of bloodsport to a high art. Though the Cult of Strife boasts dozens of the best warrior-athletes in the galaxy, Lelith herself is the diamond at the centre of the crown. Her deadly allure draws in hundreds of thousands of spectators every night — each of whom is prepared to pay a high price to the Cult's paymasters for the privilege. 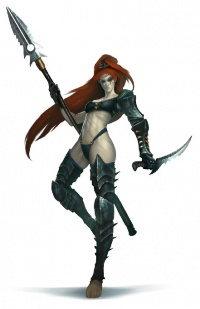 Wych of the Cult of Strife

Night after night Lelith dances her way through massed ranks of steroid-enhanced Orks, captured Carnifexes, gut-wrenching Grotesques, disgraced Archons and more besides, the crowd roaring its approval all around as she gifts each the kiss of death with a contemptuous flick of her blades. Amongst Lelith's many admirers is Asdrubael Vect himself, and the Cult of Strife has long been affiliated with the Kabal of the Black Heart as a result. Whether this is a bond of mutual admiration or the wary respect of natural born killers is immaterial, for the alliance has proven strong as steel, and strength is hard currency in the Labyrinth Dimension.

Because of her immense value to the Dark City's rulers, it is rare for Lelith to emerge from Commorragh upon a realspace raid more than once per lunar cycle, but when she does so she fights with the fury of a Daemon. Each time she returns to Commorragh with a new clutch of grisly trophies, much discussed by her legions of devotees but soon lost amidst the mass of disembodied heads that adorn her private mansions. Whilst the Wych Cult of Strife is waging war in the galaxy at large, the Kabals of High Commorragh are far more likely to mount realspace raids themselves. After all, without the Belladonna of Commorragh to entertain them, life can seem a touch more dull — and there is nothing more likely to drive the Dark Eldar into a killing spree than the threat of simple boredom.

Recently, Hesperax and the Cult of Strife have become followers of the Ynnari.[3] They are battling alongside their Craftworld kin against the forces of Chaos in the galactic east[4].