Cult of the Blessed Wormlings

Symbol of the Cult of the Blessed Wormlings

The Cult of the Blessed Wormlings is a Genestealer Cult.[1]

Infesting a string of space stations across the Black Nebula, they worship the resurgent Bio-Fleet that is moving its way through the Thalassi Sector. Using the relative privacy of orbital stations to mask their spread, the Sons prepare for their hour of ascension that will engulf the entire Sector. The vector of infection used by the Sons is inspired by the Hive Fleet they worship; where the Tyranid ships fill hollow asteroids with egg-like spores and hurl them towards planets, the Sons stow away on bulk freighters and cargo ships by the thousands. Wherever possible, they set upon their foes in stolen shuttles and aircraft.[2]

This brotherhood feeds only on the beetles and segmented annelids that burrow through the loam of the graveyard world Masuchi Parr. They preach that, by embracing the fate of the most lowly creatures, they will find a humility that brings them closer to the Star Emperor.[1] 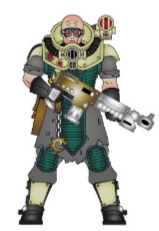 Hybrid Neophyte of the Cult of the Blessed Wormlings