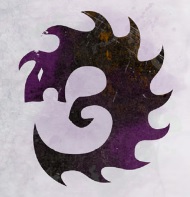 Symbol of the Cult of the Innerwyrm

The Cult of the Innerwyrm is one of the six Genestealer Cults documented by the Ordo Xenos.[1]

Based on the world of Fleishgate, the cult has long dominated the planet. They take their inspiration from the arm-length intestinal parasites they find within the guts of their livestock, just as their hidden cult grows strong within the fat-bodied mass of Humanity’s ignorant herd. The use of the saw-spined wyrm-symbol, inspired in part by the meatslasher machines the Innerwyrm cultists use in their daily slaughter, is not confined to Fleishgate. Many cults have elements that use ripping circular saws, whether to grind rock, cut through steelwood roots or salvage the parts of industrial machines – it is common for such broods to echo this sigil upon their own standards.[1]

The Cult is known to have spread its influence to other worlds by exporting Grox from the Agri-World of Peregrim's World with Genestealers hidden inside.[2]