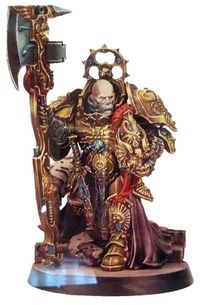 The Custodian Tribunate are a group of ten veteran Custodians who act as advisors to their Captain-General and are directly beneath him in terms of ranking within the Adeptus Custodes.

In order to become a member, a Custodian must have earned at least ten names before he can serve on the Tribunate and must have led his comrades victoriously in battle on at least three occasions. Membership of this body changes periodically to ensure a blend of established wisdom and fresh ideas, but once a Custodian joins the Tribunate, they must serve for at least ten years. During that time they will not see the front lines of battle, as they will be busy bending all of their considerable intellect to supporting – strategically and diplomatically – the Custodes' Captain-General.[1]

In the Watchers of the Throne novel series, it is stated that there are only 2 Tribunes within the Custodes by the time of the 13th Black Crusade.[2a] However the post-Great Rift 8th Edition Custodes codex states the Tribunate is made up of 10 officers.[1]