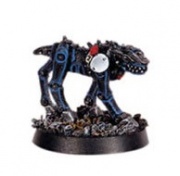 Cyber-Mastiffs are mechanical creatures that resemble a metal hound, who are guided by the brain and nervous system of a hunting creature after such components have been integrated by members of the Adeptus Mechanicus. It is not uncommon to see purely biological canines who have received some form of cybernetic upgrades.[1][2] Cyber-Mastiffs are usually deployed under the control of Adeptus Arbites Patrol and Enforcer units for hunting down their prey and to catch criminal fugitives who attempt to escape.[2][3]

Commonly known as kill-dogs, razorfangs and rending rovers, Cyber-Mastiffs have an in-built hunting and attack instinct and can only respond to the simplest of commands from their assigned handler,[1] but are still fully capable of defending themselves and their masters.[1][4] They can be fitted with additional sensors, such as an Auspex, which are always used on passive.[1]

Cyber-Mastiffs are a fearsome extension of the Emperor's Law, and a truly terrible sight to see unleashed.[2] It is said that Cyber-Mastiff can rip off an Ogryns arm in just one snap of its powerful jaws.[5]