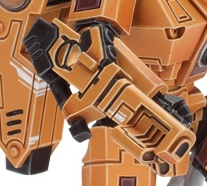 The Cyclic Ion Blaster is an experimental Tau special issue weapon which can be mounted on Battlesuits.[1]

Primarily designed to be used against numerous lightly-armored opponents, the Ion Blaster generates a rapid stream of ion radiation directed through four barrels. While the rate of fire is constant, the ionization effect is not, giving it a variable ability to penetrate armour.[1]