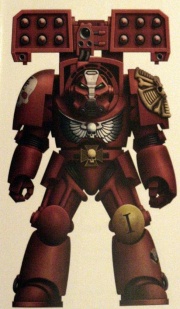 A Red Hunters Terminator equipped with a Cyclone Missile Launcher.[2]

Loaded with Krak and Frag Missiles, the Cyclone consists of two cube-shaped missile boxes, twin-linked, with a targeter and sensor array. The missile and sensor unit is fixed on the back of standard terminator armour, allowing the Space Marine to use a Storm Bolter and Power Fist with the Cyclone. Older designs of the Cyclone missile launcher had the sensor array hand-carried by the Terminator, thus taking away the option of a power fist but making it more accurate.[1]

The forerunner of this weapon was mounted (and still mounted in M41) on the Javelin Attack Speeder - anti-grav relic vehicles of the Great Crusade.[3]