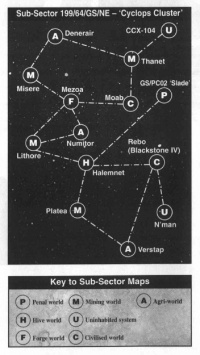 Map of the Cyclops Cluster.

The Cyclops Cluster is an Imperial sub-sector located in the Gothic Sector of Segmentum Obscurus. Worlds within the sub-sector saw fighting during both the Horus Heresy and the Gothic War.

The Cyclops Cluster sub-sector is located within the Gothic Sector, an Imperial sector of Segmentum Obscurus.[1a]

The world of Mezoa, a forge world within the sub-sector, was founded during the Great Crusade by the Adeptus Mechanicus, and its great foundries were said to have been built with the assistance of Ferrus Manus.[2a] It later saw fighting during the Horus Heresy, being attacked and briefly captured by the forces of Horus.[3] Horus' forces also attacked the abandoned knight world of Dark Haven,[3] which had previously been the home of House Orhlacc.[2b]

In orbit around the agri world of Verstap is an independent space station under contract from the rulers of Port Maw, making it an exception to the usual hegemony of the Imperial Navy and Adeptus Mechanicus in controlling such structures.[1b]

During the 12th Black Crusade, also known as the Gothic War, the Acheron Heavy Cruiser Chaos Eternus was destroyed in fighting over the agri world Numitor, having been tracked down by way of its unique energy signatures.[1c] Elsewhere in the sub-sector, the Imperial vessels Vanguard and Indomitus Imperious were crippled in a hit-and-run raid by a Chaos fleet over Halamnet; the decommissioned cruiser Admiral Drake survived only through the attackers' desire for a swift retreat.[1d] Ork pirates were known to lurk in asteroid fields near the world of Denerair; in one engagement during the Gothic War, a pirate fleet annihilated a raiding party of Iconoclast Destroyer and Infidel Raider escort ships bound for the agri world.[1e]