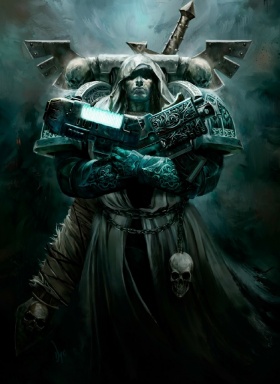 "I know not whether Cypher is the greatest threat, or the greatest hope for the Imperium. I only pray we can stop him before we find out."[3]

Cypher is a mysterious figure associated with the Dark Angels. Taking a pre-heresy title of office in The Order, his role was that of keeper of secrets and traditions. The current Cypher is said to be one of The Fallen.[3]

It is not even possible to deduce whether Cypher is for or against the Imperium, an ally or enemy to those who betrayed the Dark Angels. Cypher does not always work alone, at times seeming to ally or associate himself with others. His presence upon a planet draws dangerous elements to him from across the galaxy. Whether this is through his bidding is unclear, but it is too recurrent to be mere happenstance. Ultimately, no matter if he is surrounded by others: Cypher is a loner, a rogue agent whose true intentions are unknown to those he has served alongside. Cypher’s targets and destinations are as inscrutable as everything else about him. Among his confirmed kills have been planetary governors, Chaos Lords, Space Marine Chapter Masters, sorcerous covens, cult leaders and high ranking Inquisitors. He has fought alongside both Chaos Terminators and Daemon Princes as well as Imperial Guardsmen and Space Marines. The one thing they all have in common is that they serve the purpose in his mysterious grand plan.[5]

The Lord Cypher during the Horus Heresy[13]

Cypher itself was originally a title within the Order of Caliban. To ensure their proud traditions were maintained, the ruling Masters secretly selected a single member to become the Lord Cypher. Upon taking the title, the Lord Cypher renounced his own name, enshrouding his very appearance beneath cloak and hood. It was forbidden for any others to recognise his old self, for the Lord Cypher was to forsake his very personality, and from that day onwards was to instead embody the laws, customs and strict disciplines of the Order. He was tasked the responsibility of ensuring the traditions of the Order were upheld, and that the recruits and Masters alike were never allowed to degenerate from their lofty ideals. The Lord Cypher advised the Masters on all matters of protocol and officiated at many important ceremonies. The Lord Cypher was a lofty position, one which the Order took extremely seriously, for it was known that it was the nature of the galaxy to recede and structures to collapse. The Cypher that appears in the fortieth millennium embodies many of these ancient tenets, although there has never been any absolute connection.[5]

At least three Lord Cyphers have appeared in canon material:

At the end of the Horus Heresy, Lion El'Jonson returned to Caliban to find Luther turned to the forces of Chaos. El'Jonson landed and took up the fight against Luther while the Dark Angels fleet bombarded the planet from above. When Luther defeated El'Jonson, he realised his mistakes and collapsed, unwilling to fight any more. The Chaos Gods realised their chosen had failed and sent a vast Warp Storm to suck up the traitor Dark Angels and spread them across time and space.[Needs Citation]

The Lord Cypher, or perhaps someone impersonating him, was one of these Fallen Angels, but no one actually knows his true name. Two members of The Order, Sar Daviel and Master Remial, claimed that he was a survivor of the Knight of Lupus and joined The Order under a false name after Lion El'Jonson destroyed them[1]. 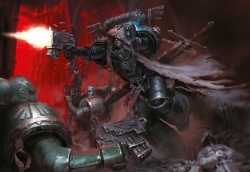 Cypher is believed to have first been identified acting an enemy of the Dark Angels during the Forgotten Wars.[5] Since then, he appears randomly throughout the galaxy, but is rumoured to be slowly moving towards Terra. He is famous for his pistol abilities, being able to fire precisely with every shot, even when using two weapons, no matter the chaos of the battle around him. His characteristic combination of Bolt Pistol and Plasma Pistol are known throughout the galaxy as rumours fill every Segmentum of the presence of a white-robed man in power armour.[Needs Citation]

Cypher may be attempting to rewrite the history of the Dark Angels and Fallen. In M41 he turned himself in to the Inner Circle and with the help of the Watchers in the Dark managed to convince them to use Tuchulcha and its brother engines to open up a time rift over the ruins of Caliban ostensibly to prevent Astelan and Typhus from doing the same. The rift was ultimately destroyed by Azrael, creating the same warp storm that originally scattered the Fallen. After the battle, Cypher vanishes.[6]

Cypher again reappeared, this time with the Harlequin Sylandri Veilwalker, before the captive Imperials of the Terran Crusade. Aboard a Red Corsairs Blackstone Fortress Cypher and his allied Fallen freed the reborn Roboute Guilliman and guided them to Veilwalker's Webway Portal. After helping the Imperials escape the clutches of the Red Corsairs, Cypher accompanied Guilliman on the rest of the journey to Terra, aiding him in the battle against Magnus on Luna. However once Guilliman arrived on Terra, he made no objection as Cypher and his Fallen were arrested by the Adeptus Custodes. Cypher was confident he would escape from a prison none had ever succeeded in escaping from.[3]

Indeed, shortly after the events of the formation of the Great Rift, Cypher escaped from his cell on Terra[11]. He is once again pursued by the Dark Angels, leading them to devastation at the Massacre at Darkmor.[10] His original jailers are also in pursuit in the form of a combined Adeptus Custodes and Sisters of Silence force under the Shield-Captain Daryth.[11]

He wears robes over his Power Armour in an attempt to hide himself, but this look has made him obvious. Perhaps this was the point, but he does seem to attract other members of the Fallen Angels to his side. It is unknown how they communicate and why they are drawn to him.[Needs Citation]

The final distinguishing feature of Cypher is his sword. It is a mysterious weapon that he has never been seen to draw on the battlefield, though rumours surround it: it is an artifacts of the Dark Angels; it is the Lion Sword; it is broken; Cypher seeks to reforge it and present it to the Emperor of Mankind, obtaining absolution and forgiveness. Cypher is notable for wielding twin pistols, a Plasma Pistol and Bolt Pistol.[10]

Cypher has been seen carrying a C’tan phase knife – a weapon similar to the C’tan phase sword used by the Callidus Assassins. The knife was at some point lost in battle with the C’tan known as the Deceiver in the opening stages of the 13th Black Crusade. However, the battle occurred in the Warp and seems to have been subject to a strange loop in either the time continuum or reality itself. Cypher is most often seen without the blade.[5]