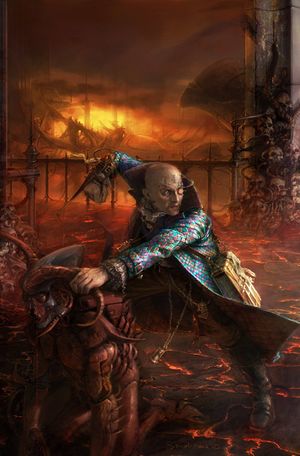 Bronislaw Czevak during the events of Atlas Infernal.

High Inquisitor Bronislaw Czevak is an Inquisitor Lord and renowned member of the Ordo Xenos made famous by his in-depth study of the Eldar.[1a][5]

Prior to the 13th Black Crusade

Czevak was born in mid M41. He studied at Schola Byblos. During his time there, while at the firing range his bolt pistol jammed and exploded, leading Czevak to think he was dead and wetting his robes. He survived, but this incident remained one of his most embarrassing memories, causing self-loathing and disgust.[1f]

He was mentored in the Ordo Xenos by Inquisitor Furneaux, and became an Inquisitor in the Ordo. When Furneaux died during the mysterious events surrounding the Second Klestry Forest War, Czevak engaged the loyalties of Furneaux's bodyguard and henchwoman Living Saint Joaqhuine Desdemondra, as much to study her miraculous gift and its relationship to his researches as out of the need for an able bodyguard.[1a]

Some time in or before 724.M41, Czevak wrote the treatise Teachings on the Unholy on the Eldar.[2][3]

At some point before 805.M41 Czevak was contacted by Radical Inquisitor Maturin Ralei, who asked for information about the history of the Eldar. Czevak had few contacts left among the Ordo Xenos at this time, but they spoke highly of Ralei's willingness to delve deeply into this kind of knowledge, and so Czevak replied. He gave Ralei a translation made by Czevak's xenolinguitor of the relevant stanzas from a sacred text of the Iyanden Craftworld, but told Ralei not to contact him again. In 805.M41 itself, while investigating Ralei after his death, Inquisitor Brehm Sasham found this correspondance, and wrote to his superiors "do not be shocked by the identity of its author: an inquisitor more renowned for his Radicalism even than Ralei. Czevak. Ha! To what other crackpot would the master of this Bestiary turn, seeking answers?"[4]

After the attack on Craftworld Iyanden by Hive Fleet Kraken in 992.M41, Czevak was deemed worthy enough by the Eldar to spend time as a guest on the Craftworld, along with his retinue, where he was even invited by Farseer Iqbraesil to attend the Dance Without End performed by a visiting group of Harlequins.[1c] This was the first time that Czevak had seen Harlequins in person, and Iqbraesil told him their names and ways.[1a]

By late M41, High Inquisitor Czevak was a frail 400 year old man confined within a cryogenic suspension suit to keep his body from failing him.[1a]

At some point prior to the 13th Black Crusade, Czevak was present upon the world of Darcturus, investigating the crash site of the Uthuriel Craftworld. It was here that Czevak excavated the shrine of Kaela Mensha Khaine in an attempt to study the means by which the Eldar utilized soul-transference technology so that it might be applied to the God-Emperor.[1a]

Unfortunately, his excavation was interrupted by a Deathwatch kill-team intent on destroying the alien abomination. But this intervention was itself thwarted by a group of Harlequins who had arrived to extend an invitation to spend the few remaining years of his life in the Black Library, granted him access to the ultimate repository of knowledge on Chaos.[1a]

At this point Czevak was infected with a Meme-Virus by his then-Interrogator Raimus Klute so that his ability to assimilate knowledge would be increased for the journey.[1a]

During Abaddon's 13th Black Crusade, Czevak was captured by Ahriman of the Thousand Sons, seeking the location of the Black Library. Although Ahriman interrogated Czevak, he was unable to learn the location.[Needs Citation]

Subsequent to the 13th Black Crusade

Time spent in the webway miraculously envigorated the aged Czevak; despite him being over 433 years old upon his return to realspace, he had the body of a much younger man.[1d]