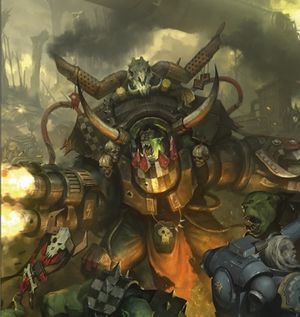 Ghazghkull during the "Da Great Waaagh".

Da Great Waaagh! is an ongoing Ork campaign launched by Ghazghkull Mag Uruk Thraka.[1] It is the largest Ork Waaagh! encountered in eight thousand years,[2b] on a scale not seen since the great Waaagh! of The Beast.

In 990998.M41, Ghazghkull’s visions become more frequent as his latest invasion of Armageddon drags on. They are now accompanied by blinding head pains and crackling green lights as Gork and Mork’s roars of displeasure boom through Ghazghkull’s mind. Leaving his generals to direct the war, Ghazghkull retreats to his command ship, Kill Wrecka, to brood. The Warlord surrounds himself with a mob of Warpheads, hoping the deranged Ork mystics can help to interpret his visions. Yet it is Ghazghkull himself who is finally struck by inspiration. He realises that no other Ork has his ambition. For the rest of the greenskin race, a good fight like Armageddon is enough to satisfy their bloodlust, but Ghazghkull can see beyond this to something greater. Possessed by a sudden, manic energy, the Warlord orders Kill Wrecka to break orbit. Scraping together a ragtag flotilla from whatever Ork warships are nearby, Ghazghkull makes for the edge of the system. He has no idea what he is searching for, only that it is not on Armageddon.[1]

Ghazghkull’s departure does not go unmarked. Deep space auger-stations identify Kill Wrecka moving out of the Armageddon system. High Command are notified, and both Commissar Yarrick and High Marshal Helbrecht of the Black Templars elect to give chase. These heroes of the Imperium depart Armageddon some days later, leading every warship that can be spared. The Imperium allowed Ghazghkull to escape once and it cost them dearly. Yarrick vows the same mistake will not be made again.[1]

Despite a sizable headstart, Ghazghkull is tracked unerringly by his pursuers. The faster, more efficient Imperial Navy warships catch the Ork fleet several weeks after leaving Armageddon. In a dead region of space known as the Haunted Gulf, Ghazghkull’s ships turn at bay for a last, desperate charge into the teeth of the Imperial Navy’s guns. The void comes alight with lance beams and blazing broadsides as the Ork ships thunder into the midst of their foes, yet they stand little chance. Though they cripple several Imperial cruisers, the Ork ships are torn apart one by one. Yarrick and Helbrecht prepare to board Kill Wrecka and ensure Ghazghkull’s demise once and for all. Yet even as they ready their assault, the ship is engulfed in a blaze of green energy and disappears without a trace.[1] Left in Ghazghkull's wake is a rapidly expanding spatial anomaly from which his pursuers are forced to flee. Within days, this swells into a Warp Storm which in turns joins with others to form the Great Rift.[4]

Even as his fleet is torn apart, Ghazghkull stomps around his bridge bellowing orders. The great Warlord is incandescent with fury, possessed of a vision so powerful that green lightning arcs around him. Their brains overwhelmed by this sudden surge of energy, his entourage of Warpheads convulse as one and begin to howl and gibber madly. As the crackling green energy that haloes Ghazghkull’s skull lashes out to strike the Ork psykers, they are engulfed in green flames, their eyes bursting and skin sizzling. With ectoplasmic power gushing from their maws, the Warpheads speak as one, their combined voice the mighty roar of Gork and Mork that Ghazghkull has heard all these months. Every Ork within earshot falls to their knees in awe as the gods tell Ghazghkull that this is not his time to die. They tell him that the whole galaxy must echo with the roar of the Ork. They charge Ghazghkull with gathering a Waaagh! like no other, the Waaagh! of Gork and Mork themselves. To do this, he must defeat every other Warlord, bring every last greenskin under his sway, and unite them all in a crusade that will drown the stars in war. Ghazghkull must unite this Great Waaagh!, and in so doing call forth Gork and Mork to lead the Boyz in a glorious battle that will last forever. Their message delivered, the Weirdboyz explode in ripe showers of wet viscera, and a tide of green power rolls outward from them, frying every system on Ghazghkull’s ship and crippling his pursuers. Kill Wrecka is immediately hurled into Warp Space, emerging somewhere (and some-when) else entirely.[1]

Kill Wrecka drops out of the Warp in the midst of the sprawling territory controlled by Ork Warlord Urgok Da Slayer in the year 694999.M41. Ghazghkull is revitalised, red eyes blazing with new purpose. Kill Wrecka makes straight for Urgok’s mighty space fortress. Knowing his only advantage is surprise, Ghazghkull fires up his ship’s tellyporta, transporting himself and a mob of his baddest Nobz in a roaring blast of light, directly into Urgok’s throne room. Urgok looks on in horror as Ghazghkull tears through his bodyguards as though they were rowdy grots. Then, trampling over their mangled corpses with his shoota still smoking, Ghazghkull looms over his cowed rival and ‘invites’ him to join Da Great Waaagh!.[1]

Most of Urgok’s Boyz join the Waaagh! willingly, while those too slow to spot which way the wind is howling are quickly beaten into submission. Within weeks, news of Ghazghkull’s new Waaagh! spreads far and wide, the massive Warboss’ legend reaching the ears of Orks hundreds of light years away, sparking the first stirring of an Ork migration on a scale never seen before. With a whole new Waaagh! at his disposal and Urgok his personal toadie, Ghazghkull turns his attentions to the galactic southeast and the empire of Octarius. If the whole galaxy is going to be engulfed in war, Gork and Mork will need a lot more Orks for their Great Waaagh! Besides, Ghazghkull has decided to show the Ork ruler of Octarius what a real Overfiend looks like...[1]

Octarius had been Ork territory for many thousands of standard years. It was not as backwater a subsector as where Urk had been, and every so often a leader would rise up, call a Waaagh!, and lead an invasion off to wreck some part of the galaxy. Indeed, the old Warlord Gorsnik Magash had rushed off to join Ghazghkull in the Golgotha Sector and was currently heading a vast force of Orks on Armageddon, holding his own in the Dead Lands. Since Gorsnik's departure, a new leader had quickly risen to fill the power vacuum and claim the title Overfiend of Octarius -- a Deathskull Warlord named Zog Steeltoof. His rule had not been a stable one, the Empire was in the midst of a major war against the Tyranids. However Ghazghkull himself, seeing an opportunity for a good fight, led his forces against the alien horde. After slaying a mighty Mawloc, Ghazghkull became the de facto leader of the Ork forces fighting in the Octarius Sector and sees this fight as one with even more potential than Armageddon.[2]

Ghazghkull has since left the Octarius warzone, and is now leading a fleet of five million ships against the Imperium.[3]

Ghazghkull and allied forces came into battle with the Space Wolves during the Psychic Awakening. This culminated in the Battle of Krongar, where the Ork Warlord dueled Ragnar Blackmane. Though Ragnar was badly wounded, he managed to behead Ghazghkull. However through rapid surgery by Grotsnik, Ghazghkull endured and now is stronger than ever.[5]

While Ghazghkull was undergoing surgery, the ambitious Ork Kommando Deff-Kolonel Zogboss attempted to take control of the Great Waaagh!. Zogboss stormed Grotsnik's laboratory, though only he was able to reach its inner sanctum. Once there, the Deff-Kolonel destroyed Grotsnik's equipment before attempting to kill the Mad Dok himself. However Zogboss is too late and before he can strike Grotsnik, the resurrected Ghazghull grabs the Deff-Kolonel's head and easily crushed it.[6]

The Great Waaagh! is having dire effects across the entire Galaxy. So many Orks have gathered in Octaria that a great wave of Madboyz psychic energy has rippled across the entire Galaxy. This phenomenon has registered with every Warp-sensitive soul in the Imperium, echoing in the Immaterium and sending shivers of fear through those who recognize its significance. The wave acts as a psychic beacon, drawing Orks from all over the galaxy to Ghazghkull's banner.[2a]

Conflicting reports by the Logis Strategos concerning the location of Ghazghkull is causing consternation at the highest levels of the Imperium. The Grand Warlord is documented to be within Octarius, yet simultaneously sacking Cantissa, upon the killing fields of Aurochtha, in the Imperium Nihilus, and fighting around Ryza. It is speculated that the Orks are using Warp Storms to 'navigate' the galaxy, and extreme empyric time dilation may also be to blame for the confusion.[4]