da Uglies, also known as Ugrak's Uglies, are a Goff Nobz mob under the command of Ugrak. They are in service to Warboss Ghazghkull.[1]

Ugrak’s Uglies are part of a battle-hardened and fighting core of Goffs that form the centre of Waaagh! Ghazghkull. They are relentless footslogging infantry, with Boyz and Nobz in 'Eavy Armour and later Mega Armour -- often much scratched and worn by the rigors of close combat. At various times, Ugrak's Uglies have acted as Ghazghkull's personal bodyguard, and they had the honour of leading the spearhead attack that helped break down the final blast door of Hades Hive.[1] 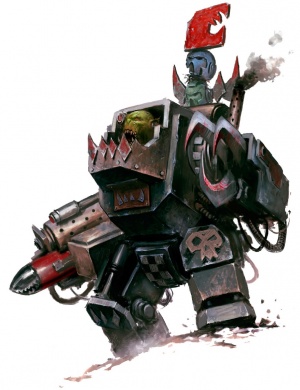