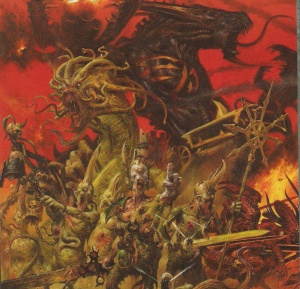 Daemons are the creation of the Gods of Chaos, formed from their own essences. Of a somewhat different nature than their masters, they are the most numerous of the Warp's inhabitants and are thought to be near-infinite in number. A Daemon is "born" when a Chaos God expends a portion of its power to create a separate being, binding a collection of senses, thoughts, and purposes together. This essentially creates a consciousness and personality that can move within the Warp. The Chaos God can reclaim this form at any time, and this ensures the loyalty of the Daemon. Not all Daemons act entirely in accord with their masters, but even the greatest of them would not dare outright defiance. Though it may appear to be made of matter in the Materium, within the Warp a Daemon is no more physical than the rest of the Realm of Chaos.[16a] 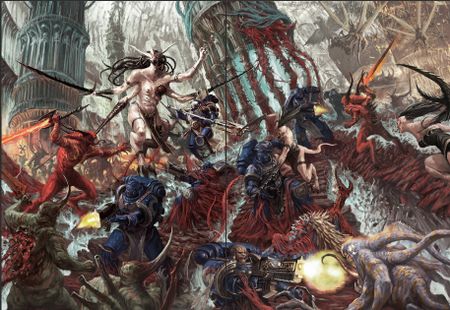 Though Daemons eternally wage the Great Game against their counterparts of the other Chaos Gods within the Warp, they are known to unite when the interests of the Chaos gods align. Faced with the prospect of claiming mortal souls and spreading Chaos within the Materium, Daemonic armies will put aside their differences for a time to fight a greater foe.[16a]

Being an entity of the Warp (a dimension of the immaterial) a daemon cannot exist for long periods of time in realspace, any more than a mortal can survive unprotected in warp space. There are a few ways a daemon can breach the walls separating warp from real space and gain entry into the mortal universe. Daemons can be fought in a physical sense whilst in realspace but are rarely killed, more frequently they are banished back into the warp to fester and brood until their next chance into realspace presents itself. Daemons who are banished back to the Warp often have their pride wounded and face mockery by their peers. In order to regain their form, the banished Daemon must remain in some sort of purgatorial state within its master's realm for an indeterminate period of time depending on the whims of their master and the circumstances of their banishment. 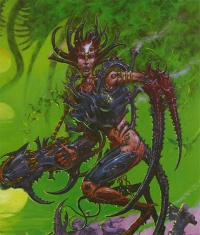 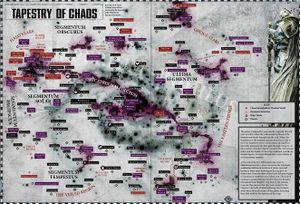 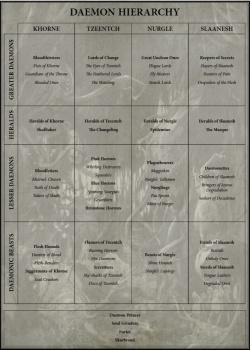 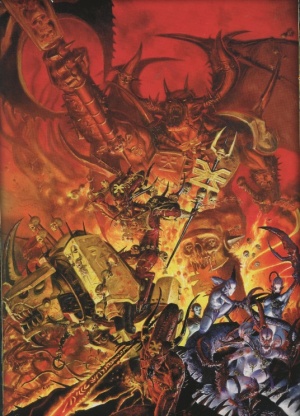 One of the few things all Daemons have in common is their True Name. Many names are rolling tides of unpronounceable syllables that can test the sanity of mortals. Nonetheless these names are highly prized. To have a Daemons name is to hold ultimate power over it, and so their bearers keep them secret even from each other.[16b]

To this end, use-names and titles are often utilized instead. These follow certain patterns. Khorne Daemons use-names are guttural and violent sounding, and those of Bloodthirsters are often composed of eight syllables or letters, like Khazdrak. Khornate names are also often descriptive, such as Skulltaker. Tzeentch Daemons are the most likely to change names and titles, for it often suits their need to do so. A Single Lord of Change may go by many different names and titles at any given time. Nurgle creations favor names with seven letters and their epithets are often grandiose or descriptive such as Feculux the Master Mucanoid. Slaaneshi Daemons use-names utilize sibilant sounds, such as Sslthri or Drya, while they have a preference for long-grandioise titles such as Exquisite Matriarch of Agonizing Death.[16b]