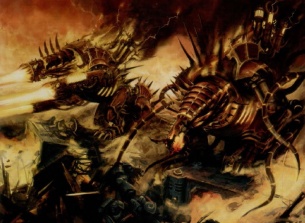 A Daemon Engine is a part-technological, part-daemonic vehicle employed by the various forces of Chaos.

Daemon Engines can vary greatly in form and function, but they are unified by one factor - the physical shells of the vehicles contain bound Daemons which control their actions. Daemon Engines have an insatiable bloodlust and revel in violence and destruction. Often they will destroy anything that lies in their path, regardless of allegiance, and so must be chained up until they can be unleashed upon the enemy. Like all entities of the Warp, Daemon Engines exude an aura of death and hatred that can overwhelm a lesser man. Untainted humans near one of these beasts often fall to their knees in horror and the demons presence fills their minds.[Needs Citation]

Creating a Daemon Engine requires that the entity be summoned by one who has knowledge of such things, such as a Chaos Warpsmith, sorcerer or priest. The Daemon is summoned into the hull of the machine so that the corruption spreads throughout its circuits, gaining complete control of all functions.[Needs Citation] 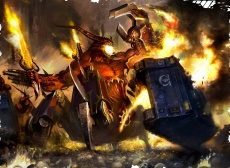