Daemon Princes are former mortal Champions of Chaos who have been elevated to daemonhood by the Gods of Chaos. They have bartered their humanity for unearthly power and immortality.[4][5c] 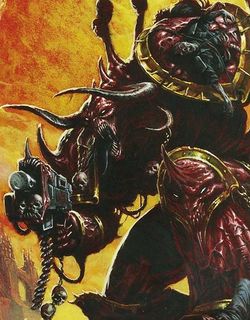 In order to attract the attention of their patrons, Chaos Champions have to perform great and terrible deeds. They sacrifice enemies and allies alike for their ambitions and risk their demise at the hands of both their foes and gods. The few that manage to avoid death and spawndom are changed beyond recognition.[4][5c]

While Daemon Princes come in various shapes, most are of hulking stature, displaying numerous mutations such as horns and wings. Even more notable are the supernatural powers they wield, some of which are associated with their patron god.[5c] What they maintain of former selves are the driving ambition and ruthless cunning which helped them earn their ultimate reward.[2]

In the 41st millennium, most Daemon Princes hail from the ranks of the Chaos Space Marines, warriors with the capability and motivation to slay the populations of entire worlds, although the oldest managed to ascend during the savage age long before mankind left ancient Earth.[5c]

Daemon Princes rule supreme over mortal Chaos followers and are usually granted reign over a Daemon World of their own.[2][3] Despite this, it is not uncommon for them to leave the material plane completely and join a daemonic legion in order to serve as right hand of a mighty Greater Daemon or even as that daemon's commander. For all their rank and power however, real Daemons commonly regard them as inferior due to their human origin, a belief that is very rarely proven, as many Princes have slain powerful Daemons long before joining their immortal ranks. [5a][6]

The most infamous of the Daemon Princes come from the traitor Primarchs that turned against the Emperor during the Horus Heresy.[7] These powerful beings are still revered by the very Legions they corrupted millennia ago, even though it is uncommon for them to personally lead them forth from their Daemon Worlds. Instead they prefer to fight against their enemies within the Eye of Terror, leaving the direction of their Legions to their loyal minions and Champions. Arguably greater in power than any other Daemon Prince or Greater Daemon, they are feared and respected by all who worship chaos and are looked upon as personal champions by their gods.[5c] 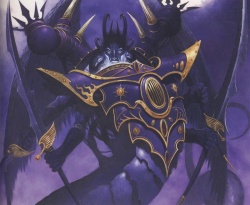