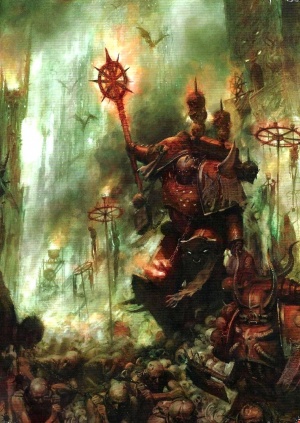 A Daemon World ruled by the Word Bearers

A daemon world (or daemon-world[4]) is a planet twisted and corrupted by the power of Chaos and the warp from being trapped in a prolonged warp rift. Entwining the impossibilities of the warp and the reality of the physical realm, Daemon Worlds are not bound by the laws of physics, but by the whim of daemonic rulers and the emotions of mortals.[1]

Daemon Worlds are usually ruled by a Daemon Prince, who can shape the world to his liking. Each of these worlds is a bizarre sub-reality ruled by terrible Daemon Princes. The four Chaos Gods continuously compete to possess the Daemon Worlds. Armies of daemons and their living allies fight huge and bloody battles to determine which of the Chaos Powers will possess them. These battles often last for hundreds of years, so that the entire world becomes little more than a gigantic arena where the opposing forces are pitched against each other. The Chaos Powers do not, of course, appear in person to lead their armies - they are spectators to events, not participants. Their generals are Greater Daemons and favoured Daemon Princes who, because they were once alive, understand the nature of both the material universe and the immaterial Realm of Chaos. Once a Daemon Prince has conquered a world, his grateful patron gives it to him as a gift to rule over as he wishes.[Needs Citation]

When a Daemon Prince takes control of his hard-won world, he uses his mighty powers to reshape it to a form that pleases him. Because of this, every world is different and all are equally spectacular in their own way.[Needs Citation]

The most powerful psykers have reported dreams or visions in which worlds of the Eye of Terror have been revealed to them. On one world a black sun stands in a white sky and smoky threads pour from it onto a tangled black city - this is said to be Medrengard, the world of the Daemon Prince Perturabo, formerly the Primarch of the Iron Warriors Space Marine Legion. Another world has boiling lakes of blood from which spheres of fire float into the sky and spread their light across the firmament - the ruler of this world is the Daemon Prince Bubonicus, formerly a mortal Champion of Nurgle on one of the myriad lost worlds in the galaxy. Visions of such places disturb the psychically sensitive throughout the entire galaxy.[Needs Citation]

The majority of known Daemon Worlds in the Galaxy are found within the Eye of Terror; those few within the borders of the Imperium are rigorously guarded by the Inquisition, since, unfortunately, because of the reality-shifting effects of the Warp, it is all but impossible to subject them to Exterminatus[3].