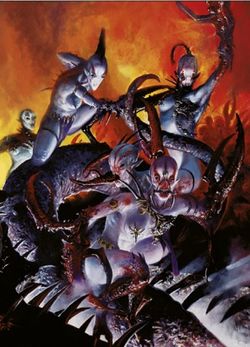 Daemonettes are Lesser Daemons of Slaanesh. They are the most numerous of his daemonic minions and serve him as handmaidens, warriors and agents.[1] [2]

Daemonettes appear as both beautiful and repulsive to those who look upon them. Their bewitching opal eyes and enchanting aura veil their androgynous features and grotesque claws, revealing an alluring appearance the beholder will always consider the epitome of beauty. Depending on the situation Daemonettes can be gracious and swift warriors, using their razor-sharp claws when violent force is necessary, or subtle messengers and seducers who will haunt the dreams and nightmares of their victims. Others are armed with an Instrument of Chaos or Rapturous Standard.[7]

Those Daemonettes that excel in their servitude may serve the Lord of Pleasure personally as courtesans on his throne. The more privileged a Daemonette is, the closer she is allowed to approach the throne. [2] Some are capable of flight.[6]

Champions of Daemonettes are called Alluresses.[4][5]