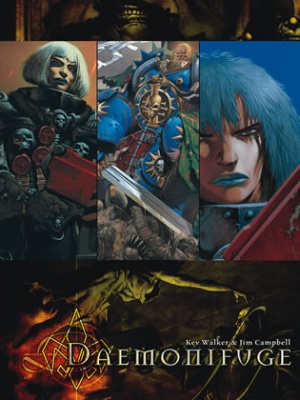 Daemonifuge is a series of three graphic novels written by Jim Campbell and illustrated by Kev Walker.[2]

Ephrael Stern, a Seraphim of the Adepta Sororitas is kept inside the Convent Prioris upon Ophelia VII. She scribbles forbidden knowledge upon the wall of her cell. Inquisitor Silas Hand arrives to investigate, and an unlikely assassin tries to kill her. Why? Because she is the Daemonifuge. Her secret lies upon the planet Parnis.[3a]

Meanwhile the shamed Eldar Kyganil tries to rescue the Spirit-stones of his fallen comrades, little knowing that his destiny is intwined with a certain Seraphim.[3a]

Possessing the knowledge about the strengths and weaknesses of a Chaos God, Seraphim Ephrael Stern is finally rescued. Meanwhile the net upon her closes tighter and tighter. For not only do the minions of Slaanesh want her, certain members of the Inquisition also want to capture her... or kill her.[3b]

Ephrael and Kyganil both are captured by Chaos Space Marines and subjected to harsh interrogation in an attempt to break their will and find the Black Library, as well as use Ephrael as a weapon. However, the Grey Knights are hot on their heels with standing orders to capture Ephrael Stern alive. Ephrael is faced with all sides wanting her as a weapon, and the realization that her third and final birth is still to come.[3c]

The second graphic novel Daemonifuge, Book 2: the Lord of Damnation collected in 2002.

The stories in Daemonifuge book 1, 2 and 3 are collected in one volume. The collection is colorized and published 2020 in: "Daemonifuge 20th anniversary edition".