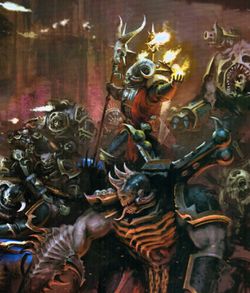 Daemonkin are bands of Chaos Space Marine warriors who are devoted worshipers of the Ruinous Powers.

Led by Masters of Possession, Daemonkin warbands are seen within each of the Traitor Legions and many Renegade Chapters. These formations often serve as potent bands of shock troops that can tear through the toughest of enemies.[1]

The bodies of Daemonkin are blazing crucibles into which the powers of Daemonic spirits flow. Willing hosts who believe that through sacrifice of one's flesh can true power be attained, the processes of becoming one of the Daemonkin is long and excruciating. Warbands of Daemonkin seek troves of profane lore, Warp-touched relics and sites of dark power. They learn the names of Greater Daemons that might grant them patronage, and perfect rituals of binding and sacrifice. When they are successful in summoning armies of Daemons to the battlefield, the Daemonkin act as ephemeral anchors that allow their allies to linger in realspace far longer than they might otherwise be able to do.[1]

All four of the primary Chaos Gods have Daemonkin warbands devoted to them. Khornate Daemonkin are crazed killers who seek to drown the stars in blood, abandoning reason and control in desperation to sate the Blood God's thirst. Those who embrace Tzeentch seek to unlock the mysteries of fate, believing that they can balance both the daemonic and mortal aspects of their soul. This belief is inevitable shown to be deluded, the supplicant ultimately becoming a plaything for the Changer of Ways. The Daemonkin of Nurgle delight in being infested by the gifts of their generous god, becoming living vectors for all manner of hideous supernatural diseases. Those sworn to Slaanesh seek new and forbidden pleasures, believing that hosting a Daemon of the Dark Prince will open their minds to infinite pleasure and excess.[1]

At first, Daemonkin warbands are populated with mortal warriors. Over time however, these Heretic Astartes seek to commit acts in the name of the Chaos Gods. Each act of slaughter or other dark significance ripples through the Warp and increases the chance that their body will serve as a host for a Daemonic entity. When such unholy pacts have been formed, the Daemon is melds with the soul of the chosen in an agonizing ritual. Thus over time the ranks of these warbands become packed with malformed abomninations.[1]

Warriors of the Daemonkin