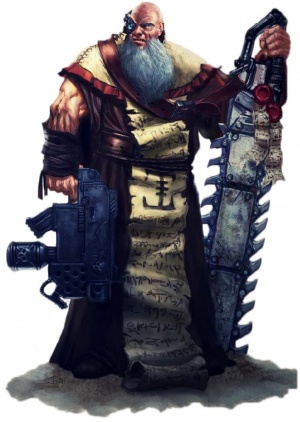 Banishers, also known as Exorcists[3], are pious men of the Ecclesiarchy which specialize in the banishment of Daemons through the Litany of Purity. Their skill in the field results in them often being used in the Retinues of Inquisitors.[1]

Not all Banishers are trained by the Ministorium. On many Calixis Sector Feudal or Feral worlds, wise men steel themselves to study that which dwells in the dark, seeking wisdom to help them vanquish Warp-spawned entities. While these elders are not usually steeped in the tutelage of the Ecclesiarchy, they are no less devout to the Imperial Creed, and can be quite useful in rooting out long forgotten omens and ancient secrets in Imperial archives. Many Inquisitors have also been known to train Banishers to combat specific daemons.[2]

Banishers hold a delicate position in an Acolytes Cell. Experienced Acolytes revere them for their wisdom and temperance in the face of terrible secrets, and often owe their survival and success to the madness the Banisher has interpreted for them. Yet these same Acolytes know that no mind can understand the unknowable and walk away unscathed. Therefore Banishers are seen with a distant respect and watched closely for fear that they may suddenly snap under the weight of their dark knowledge. Though occasionally found within other Ordos, Banishers are usually under the employ and oversight of the Ordo Malleus. A Malleus Inquisitor may employ dozens, or hundreds of Banishers all working diligently to uncover the details of a Daemonic incursion into the materium. Many Banishers work in groups, though not for the sake of efficiency. There have been cases of Banishers using their knowledge to gain personal power or to traffic with daemons. Thanks to their training, however, these instances have been few, and placing them in a larger group allows other Acolytes to keep an eye on them as needed.[2]

The following brand of the exorcism ritual was practised by Exorcist Amortus in the Cathedral of Illumination on Scintilla:

"The main officiant, called Arch-Exorcist, is responsible for conducting the ceremony and leading the prayers; he is assisted by a Pardoner, which ensures that the victim being exorcised does not fight back against the attempts to force the daemon out of him (the role’s name comes from the fact that the victim cannot control his actions at this point, and that the Pardoner forgives him at the same time as restraining him). The other assistants are called Celebrants of the Emperor’s Will.

Firstly, the victim is laid out on the floor of a circular chamber, wrapped in a white grave shroud."

The Arch-Exorcist then reads the following ritual preamble: “We call upon His majesty and power to drive from our presence the Enemy, an abomination of the Dark Powers that cleaveth not to the law of Man and Nature. Cast Out! By the God-Emperor’s light, burn! His wrath let it tremble! Celebrants! Pardoner! Let us begin!” and sprinkles holy water over the victim.

Immediately afterwards, a branding-Cherub will burn an imperial Aquila into the victim's forehead. If the branding fails to imprint the Aquila clearly, it is seen as an ill omen.

The Arch-Exorcust will then recite “Now, brethren, by the fury of your curses and the foulness of your tongues, bid this daemon depart our brother/sister!” The celebrants thus try to drive out the daemon with the foulest and most imaginative curses possible, while the Arch-exorcist prays.

At this point the daemon will usually try to interrupt the ritual by assailing the minds of the celebrants.

If the ritual fails, the host will die as the daemon possesses his body, but will still be able to join the Emperor's side in the afterlife.