Daenyathos is a novella written by Ben Counter, featuring the Space Marine of the same name, and acts as a prelude to the events of Counter's Soul Drinkers (Novel Series).

The novella was originally published as an A5 hardback novella in August 2010[1], and republished again in May 2013.

For millennia, the writings of Chaplain Daenyathos have been the guiding force behind the Soul Drinkers, his wisdom taking them from strength to strength. But a dark secret lurks at the heart of Daenaythos's Catechisms Martial, a cancer that will eat away at the Soul Drinkers and ultimately damn them. Spanning the centuries from the Age of Apostasy to his mysterious disappearance, this is the story of the Philosopher-Soldier's life, of his rise... and of his tragic fall. 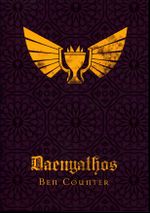