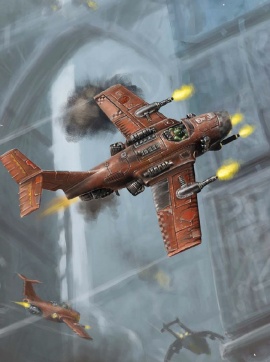 A Dakkajet is a type of Ork fighter.

A Dakkajet is an Ork fighter aircraft specializing in both air-to-air and ground attack missions.[4] A blur of colour and noise amidst the smoke and clamour of battle, the Dakkajet is propelled by a single, massive jet engine. It roars through the sky, gunz blazing a near constant stream of bullets, tormenting fleeing infantry or enemy aircraft. Dakkajet pilots believe firmly in quantity over quality, and commonly bolt as many guns as possible to their aircraft - some of those bullets are bound to hit the target.[1][2] The engines of the Dakkajet are crude and simple, but powerful and incredibly effective at producing enormous levels of thrust. In a straight line, they are more than a match for any other aircraft in the Galaxy but their maneuverability leaves much to be desired. Thus most Dakkajets are equipped with angled thrust nozzles used to change trajectory with extreme violence. Consequently, they appear to be dangerously out of control and always a millisecond away from disaster.[5]

From the outside, Dakkajets share many common features. However like most Ork vehicles, no two Dakkajets are truly the same but rather are subject to the own unique taste of its Mekboy designer. However no matter the design and customizations, all Dakkajets carry thousands of rounds of ammunition. Dakkajets pilots are known to be a cut above other Flyboyz, with legends such as Da Krimson Barun, Da Sky Shredda, and Da Blue Mek having scored countless kills.[4]

Dakkajets are typically armed with an array of two to three twin-linked Supa Shootas, which are capable of laying down a hail of fire, but are highly inaccurate.[1][2] They also are known to carry Rokkits and wing-mounted bombs.[5]

Dakkajets that have been heavily rebuilt, are known as Turbo-Dakkajets, though the extent of their modifications vary from fighter to fighter[6][7]. Some can be made to go faster and have heavier firepower, so they will have large engines, larger air intakes, extra exhaust pipes, Big Shootas and use Stormboy Rokkit Packs for Turbo-Thrusters or possibly missiles[6]. Others could be modified to perform stunts in battle, so they will have their cockpits shifted further back and have their weapons extended to stretch along the Turbo-Dakkajet's fuselage.[7]