Damocles is an anthology released by the Black Library, a tie-in to Apocalypse, collecting four novellas taking place during the Second Damocles Gulf Crusade. It was later republished as part of the Space Marine Battles novel series.

Two centuries ago, the Imperium of Man and the upstart Tau Empire fought to a standstill in the Damocles Gulf. Now, as the 41st millennium draws to a close, the tau have returned. As the world of Agrellan falls under attack, the White Scars and Raven Guard rush to its defence, but with the skilled Commander Shadowsun leading the alien forces, the Space Marines and their allies are hard pressed. Kor'sarro Khan, Huntmaster of the White Scars, swears that he will win the day in the most direct way possible – by taking Shadowsun's head. 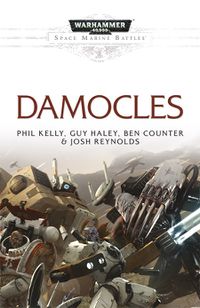