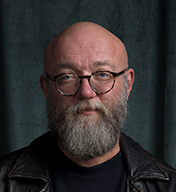 Dan Abnett lives and works in Maidstone, Kent, England. He graduated from Oxford University and he has worked as a comic book and children's book editor. He now concentrates full time on writing. In the years since then, he has written for a diverse range of characters - including Scooby Doo, Thunderbirds, Conan the Barbarian, the X-Men, Johnny Bravo, Batman, Rupert the Bear, Dr Who, Mr Men, The Terminator, and Postman Pat.[Needs Citation]

Abnett's early work for the Black Library includes the Gaunt's Ghosts and Inquisitor Eisenhorn novels. His later work includes several volumes of the ongoing Horus Heresy Series (including the first, Horus Rising (Novel)), and the screenplay for Ultramarines - A Warhammer 40,000 Movie.[Needs Citation]

He has also co-authored several works for the Warhammer Fantasy universe, including the novels Gilead's Curse (with his wife, Nik Vincent) and Hammers of Ulric (with James Wallis).[Needs Citation]