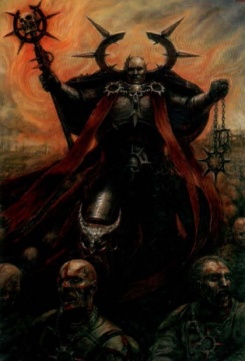 The Dark Apostles are the corrupted Chaplains of the Word Bearers Chaos Space Marines Legion, who gleefully redirected the Legion's fanatical zeal from preaching of the Imperial faith to howling the praises of Chaos. Dark Apostles are impassioned and charismatic preachers, capable of causing entire Regiments of the Imperial Guard or even loyalist Space Marines to defect to the forces of Chaos.[5]

During the Great Crusade, the Word Bearers were always the most spiritual of the Space Marine Legions, even despite the Emperor's official ban on religious worship of all kind. The Primarch Lorgar created a secular role for spiritual advisors, referring to them as Chaplains, assigned to minister to their brothers' psychological needs.[6]

After the Decree of Nikaea, Lorgar generously offered his Chaplains' services to the other Legions. These Chaplains traveled among the Legions to counsel former Librarians who felt uncomfortable at the loss of their psychic role, and ease them back into duty as ordinary Battle-Brothers. Some of the other Primarchs accepted Lorgar's offer, while others, like Sanguinius, declined, as his Legion already had a similar role, the Wardens.[6]

In battle they are skilled demagogues, able to exhort followers to greater acts of bravery and depravity - enemy commanders have often found out to their cost that the only way to truly blunt an attack by such fanatics is to either remove the Apostle, or destroy each and every Word Bearer facing them. Their strategies sometimes border on prescience.[Needs Citation]

Dark Apostles still carry their ritual Crozius Arcanum as they did before their fall, although the resulting Accursed Crozius have long since been corrupted and debased into deadly icons dedicated to the Chaos Gods themselves. Not only does this make them lethal assault weapons, it also marks the bearer as receiving the dark favour of the Gods, granting them protection from their enemies and allowing them a much deeper connection with the denizens of the warp. They are said to have a Senior War-Captain and an Apprentice in each of the Hosts led by a Dark Apostle. The Senior War-Captain is called a Coryphaus who leads the Word Bearer host and his words are only second to the Dark Apostle, the Apprentice of the Dark Apostle is named as a First Acolyte and will inherit a portion of the Host when the Dark Apostle and the Dark Council sees it fit. Usually the untimely death of a Dark Apostle is marked with a great loss and weeks of ceremonies are held in his commemoration, in that time the Captains of the dead Apostle's Host are summarily executed for allowing such a thing to happen and the host absorbed into the ranks of a more able Dark Apostle.[Needs Citation]

In battle, Dark Apostles are often accompanied by their Dark Disciples.[9]

Grand Apostles are powerful Dark Apostle that are represented on the Dark Council of Sicarus.[2]