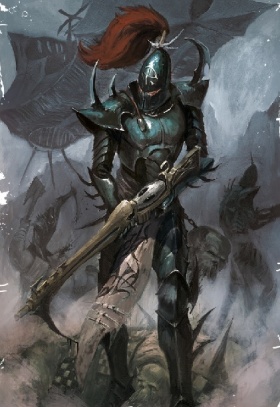 Kabalite Warriors are the basic soldiers of a Dark Eldar Kabal. They make up the vast majority of the soldiers in a Kabal, and perform any and all tasks too important to leave to the slaves.

The innate danger of simply living in Commorragh gives its citizens training as warriors from birth, their entire lives a constant fight for survival leaving even women and children to be better able to defend themselves than their Craftworld cousins.[2a] Because of this, and because of the need for some form of a safe haven even just to sleep at, almost all citizens of Commorragh are Warriors in a Kabal. The small fraction left make up the Wych Cults, Incubus and Haemonculi sects.[Needs Citation]

Due to the need to constantly replace the populace, the Dark Eldar will grow new Dark Eldar in amniotic tubes or vats. Most of these are assigned to a life of slave labour, but a few excel enough to become a warrior in a Kabal.[Needs Citation] Even so, they are considered Half-Born.[2b]

Kabalite Warriors are individuals that have excelled enough to be noticed by a Sybarite. They are then granted increased status and inducted into the warriors of the Kabal. The Kabal furnishes weapons and armour in return for lifetime service to the Kabal. Despite this, the new warrior generally has no loyalty to the Sybarite, seeing him or her as just another stepping stone to power in the Kabal.[2b]

The leader of a squad of Kabalite Warriors is given the title Sybarite. Like all other ranks Dark Eldar can achieve, the Sybarite is simply the best warrior in the squad, and new Sybarites are decided by warriors of a squad killing their superior officer in order to take their title.[2b]

Due to the Sybarite's status, he or she usually has acquired better armour and weapons than the squad members have.

Kabalite Warriors are frequently dispatched in large groups of five to twenty soldiers including the Sybarite. This way they have the best chance of survival against smaller, but more heavily armoured enemies such as Space Marines, allowing them to drown targets in Splinter fire or team up on enemies to ensure quick resolution to melee combat.

Some Kabals prefer to send smaller groups of five to ten Warriors per squad, then assigning them a Venom or Raider transport in order to make them even quicker at traversing a battlefield, giving their enemies as little time to react to the situation as possible, thus increasing and exploiting even the tiniest flaws in their defensive strategies. Only larger Kabals are able to afford the number of transports necessary for this technique.

The Warriors of Commorragh, like the vast majority of Dark Eldar troops, focus more on speed and strength than they do on defence. This fact is reflected in their equipment.

Standard issue weaponry for Warriors is a Splinter Rifle. They are trained with a variety of weapons, however, in the event that their Archon chooses to assign different weapons to their squad. These weapons are:

Due to the Dark Eldar's desire for speed and dexterity over defensibility, their armour is a thin, light-weight flexible bodysuit, pressurised to allow Warriors to traverse the vacuum of space. Just like standard-issue Eldar suits, they respond to neural impulses from their wearer and harden on command, allowing for the Warriors to shrug off civilian-grade firepower, but requiring them to rely on their superior combat abilities and quick reflexes to survive the engagement against more challenging targets.[1]

The Trueborn are Dark Eldar that were not grown in a vat, but were actually born from a Dark Eldar female.[2b] These Trueborn are given more value than the half-born, and as such earn a higher place in the Dark Eldar society. The Trueborn form units of their own, and given their elevated status can afford better armour, weapons, and other equipment.[2b] Also, because Trueborn are not as numerous, they usually form smaller units than their half-born counterparts.

In addition to the equipment the standard Warriors have, they also can field:

The leader of a Trueborn warrior squad is a Dracon.