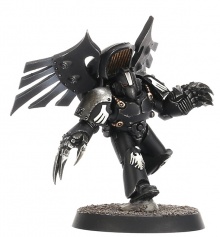 These special Assault Squads were utilized by the Raven Guard to conduct focused decapitation strikes on specific enemy leaders during battle. Far from subtle assassins, they descended directly into the midst of battle. Their squad leaders, known as the Choosers of the Slain, engaged the target while the warriors cut down any retainers who attempted to intervene. The squads were equipped with Lightning Claws fashioned after those carried by their Primarch, Corvus Corax, and the Choosers of the Slain were issued Artificer Armour.[1]

The squads were often deployed from Darkwing or Whispercutter aircraft, leaping from great heights with their silenced jump packs to descend upon the enemy.[1]