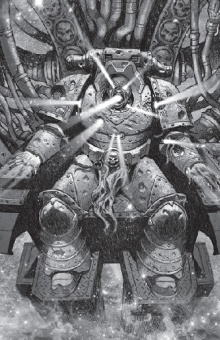 Dark Glass is an ancient device dating back to the Dark Age of Technology.

Consisting of a long crystalline station over the Catallus Warp Rift, the Dark Glass was surrounded by a massive planet-sized hollow shell of mirror-like material. The origins of the device are unknown, but it is thought to have been used to test the technology that would later result in the Golden Throne. Like the Throne, Dark Glass was capable of accessing the Webway and was commanded by a central Throne that required a Psyker of enormous power to operate. Accordingly, the Emperor may have planned one of the more psychically gifted Primarchs to power the device or its sister on Terra. But as a mere tester of its technology, Dark Glass was far less powerful than the Golden Throne.[1]

During the Great Crusade, the Dark Glass was discovered by the Emperor, who sought to reactivate the device in order to advance his own Webway access project. The research team was led by the Navigator Pieter Helian Achelieux, who diligently worked to unlock its mysteries despite the threat Dark Glass and the Golden Throne presented to the Navis Nobilite, whose control of Warp travel would be rendered obsolete by its completion. However the Dark Glass was kept a secret from the greater Imperium for reasons including fears as to how the Navigator Houses would react. The station's Warp Rift eventually drove the crew mad, and as Dark Glass erupted in bloodshed Pieter was killed by the command throne when he attempted to open a portal into the Webway.[1]

Later during the Horus Heresy, the White Scars were able to eventually discover the now-abandoned Dark Glass' location. They were pursued by a Death Guard and Emperor's Children fleet led by Mortarion himself. In the ensuing battle, an agent of the Navis Nobilite who had accompanied the Scars, Veil, managed to begin the station's destruction with vortex charges. As the station collapsed around him and with the enemy closing in, White Scars Stormseer Targutai Yesugei sacrificed himself on Dark Glass' throne to open a portal to Terra that allowed the White Scars to escape. Dark Glass exploded shortly after.[1]