The Dark Hunters are a Codex Chapter of Space Marines.

The Dark Hunters were founded in the dark days of the Occlusiad.[3c] Their first Chapter Master was Angnar, formerly a Captain of the White Scars.[7] The first campaign of the Dark Hunters saw them fighting against the Daemon Engines and corrupted Warlord Titan Repellus Maximal of Warpsmith Hilghar during the Battle of Bloodsteel. This has left a deep rooted mistrust against machines within their psyche. Even today, they have strained relations with the Adeptus Mechanicus.[3a]

The Dark Hunters have a reputation for being grim and resolute warriors with have a deep distrust of machines. They are one of the 7 Space Marine chapters currently charged with hunting down the Chaos Space Marine warband known as the Punishers.[3d]

The Dark Hunters are largely Codex Compliant, but maintain unique titles for their various Companies. 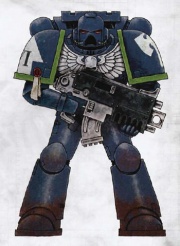