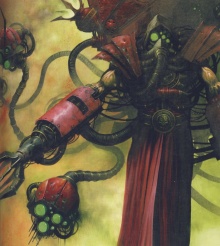 A Tech-Priest of the Dark Mechanicum.[4b]

Horus gained the loyalty of a sect within the Mechanicum after promising them STC technology gained from the worlds of the Auretian Technocracy and the opening of the vaults of forbidden technology on Mars. In addition, Horus's emissaries and spies told the Tech-Priests that the Emperor planned to steal the secrets and technology of the Martian Mechanicum and even eventually enslave the Tech-Priests. Lastly, Horus used the ideological schism within the Mechanicum, between those who believed the Emperor was the earthly representation of the Omnissiah and those who still thought such a figure was entombed on Mars, suggesting it was the Emperor himself who had presented himself as their god in a scheme to make him their servants.[4b]

Having won over many of the Mechanicum's Priests, Horus encouraged his new allies to dabble in previously forbidden technologies, gradually enticing them to the powers of Chaos.[4b] In the resulting Schism of Mars, the Dark Mechanicum led by Fabricator-General Kelbor-Hal supported the Warmaster during the start of the Horus Heresy and were present on Istvaan V where they used dark and forbidden knowledge against the Loyalist forces.[1] With the defeat of traitor forces after the Battle of Terra and the subsequent Great Scouring, the Dark Mechanicum fled into the Eye of Terror with their Chaos Space Marine allies.

In the 41st Millennium, the Dark Mechanicum are still active, utilizing massive, daemonically corrupted Titan war machines of the Traitor Titan Legions against the Imperium and producing infernal weapons and Daemon Engines from Hell-Forge worlds such as Xana II.[3]

During the Thirteenth Black Crusade, the Dark Mechanicum began invading Imperium worlds that were devastated in the aftermath of the Great Rift's creation. Their targets are not picked at random, however, as the Dark Mechanicum are searching for ancient archeotech that will help them complete an unholy weapon of war and terror whose like has not been seen since the Dark Age of Technology.[5] 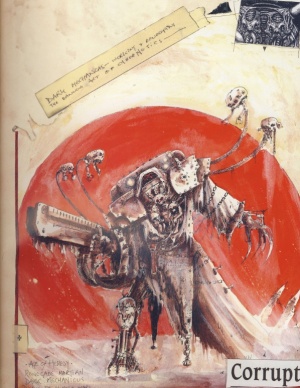 Unlike their loyal Mechanicum brethren, the Dark Mechanicus has no issue with modifying STC's or other forms of sanctioned Imperial technology.[9] As a result they have no qualms in uncovering forbidden technology from the Dark Ages such as the Silica Animus[10a] and Anima Mori.[10b] Dark Mechanicus technology is heavily intertwined with the Warp and Daemonic and they have no boundaries when it comes to genetic experimentation and advanced cybernetics that push the limit of Humanity[9a]. As demonstrated with devices such as the Kaban Machine, the Dark Mechanicum has little to no quams when it comes to the development of Artificial Intelligence.[11]

However of all their esoteric technologies, Daemon Engines are the most infamous technological creations of the Dark Mechanicum.[9] Dark Mechanicum Forge World produce weapons of war for not only themselves but also Chaos Space Marine and other Chaos-affiliated warbands in exchange for slaves and resources.[3]

The forces of the Dark Mechanicum are an echo to those of their Adeptus Mechanicum brethren. Their Tech-Priests often wear dark red robs while others wear black robes symbolizing their original loyalty to Horus.[13] However there is little standardization, and Dark Magi cabals often decide their own appearance and level of bionics.[14]

Below their Tech-Priest masters, Dark Mechanicus infantry consists of both hordes of expendable drug-fueled Mutant slaves and Servitors[9b] alongside crack infantry dubbed Dark Skitarii. These dark mirrors of the Skitarii are heavily mutated and corrupted, often wearing black robes and donning horned helms.[6a] Daemons and Possessed are also common infantry in Dark Mechanicum armies.[9c] The War Robots of the Dark Mechanicum are steeped in Chaos energy and wield ancient energy weapons.[9d] Some Chaos Space Marines have also joined the ranks of the Dark Mechanicum.[18a][18b]

Dark Mechanicum armor consist of a wide variety of vehicles. These include anti-grav vehicles and light walkers[9b], Eviscerator Engines, and artillery carriages[6a]. They wield a large amount of Daemon Engines, including Defilers[16] and Brass Scorpions.[15a] Commonly used aircraft include Hell Blades and Hell Talons.[15b] 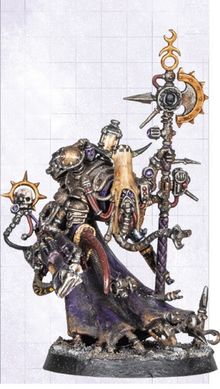 Notable Worlds of the Dark Mechanicum