The Dark Reapers are one of the types of Eldar Aspect Warrior. The most sinister of the Aspect Warriors, Dark Reapers emulate Khaine in his aspect as "the Destroyer," and specialize in the use of destructive, long-range weaponry.[1a] 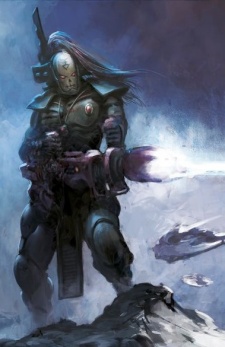 The Dark Reapers are descended from Maugan Ra, the Harvester of Souls, a mighty Phoenix Lord and the founder of their Shrines. It was from him that the Dark Reapers learned that even the mightiest of weapons can be wielded with the precision of a scalpel, and so they take pride in the accuracy with which they use their signature weapon, the Reaper Launcher. Spitting forth a hail of armour-piercing missiles capable of taking down even the best-protected foes, these weapons allow the Dark Reapers to exert total control over the battlefield and destroy targets at will.[1a][3a]

Their unerring accuracy is assisted by their Aspect Armour, a skull-masked costume the colour of midnight. These symbols of destruction include a complex set of interlocking plates which provides better protection compared to other Aspect Armour sets.[1a][3a] To absorb the recoil of firing the Launcher and maintain a steady firing position, the powered limb supports include lower leg armour and boots fitted with stabilisers and clamps to secure the Dark Reaper to the ground.[2a][3a] Their helmet incorporates specialised rangefinding equipment, part of which extends out of the helmet in the form of sensor vanes, which allows them to achieve target lock on even fast-moving vehicles. This also creates a mind-link with the Dark Reaper's weapon, allowing them to "see" out of the muzzle of the launcher.[1a][3a] The resulting increase in their already deadly accuracy means it is almost impossible for a Dark Reaper to miss his target.[1b]

The downside to all of this extra equipment, along with the weight of their weapon, is that Dark Reapers are slower and less mobile compared to other Aspect Warriors; given their tactical role of long-range fire support though, this is seen as less of an issue. Operating in squads of three to five Dark Reapers, one of which may be an Exarch, these units are usually positioned in cover behind the main Eldar battle line, where they can best support the advance of friendly troops and target the enemy's heavy assets. For added mobility the squad can also be mounted in a Wave Serpent transport.[1a][3a]

The rune of the Dark Reapers symbolizes the scythe that harvests the living. The warrior rune here is inverted, embodying the essence of morbidity, unconventional talent or merciless intent.[4] 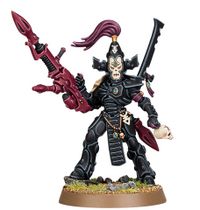 Every Aspect Shrine has its Exarchs, individuals who have traveled so far down the Path of the Warrior that they have become lost upon it. This gives them great skill and dedication, and their shrine honors them by granting them access to their oldest and most powerful equipment, including ancient and ornate Aspect Armour containing the spirits of past Exarchs who provide guidance and a pool of raw psychic power.

The skills and equipment of a Dark Reaper Exarch exemplifies the already deadly firepower and accuracy of their Aspect. Instead of a Reaper Launcher, some Exarchs will arm themselves with a larger Eldar Missile Launcher, a Tempest Launcher, or a Shuriken Cannon.[3b] Their supernatural abilities make even the talents of regular Dark Reapers pale in comparison, as they are perfectly adept at firing more rapidly without loss of accuracy any weapon they wield or land pinpoint shots so accurate they can bypass cover and hit targets which thought themselves protected.[3a]