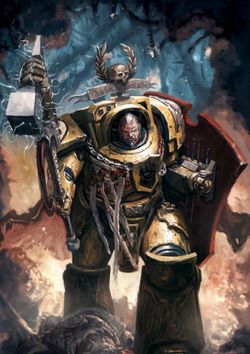 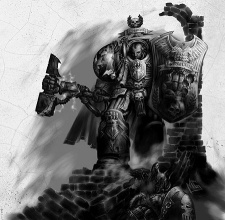 Darnath Lysander is First Captain of the Imperial Fists and a legendary hero among the Space Marines.

Lysander was recruited from Holy Terra himself after a 13-year-long pilgrimage that saw the death of his parents. The youth's survival through Waaagh! Grozdakk and the Quesarch Heresy had made Lysander famous, and brought him to the attention of the Imperial Fists' Chaplain Shadryss. When Shadryss found the boy near the Pillar of Bone, a famous monument known only to a few as the last remnant of the Fists' Fortress-monastery on Terra, he took it as a sign from Rogal Dorn himself and recruited the boy.[3]

During his first engagement with the Iron Warriors Warsmith Shon'tu, Lysander (only a Scout at that that time) allowed the Warsmith to escape, choosing instead to defend the life of a hostage - a decision he would come to regret later.[6]

Lysander first appeared in the Liber Honorus Imperial Fists in 567.M40 as a sergeant in command of a unit in the 3rd Company, where he was victorious over a group of heretics on Iduno at the Battle of Colonial Bridge. He was then promoted to command of the 2nd Company in 585.M40 after successfully boarding and capturing an Eldar Cruiser named Blood of Khaine.[1][3]

During the three-year siege of Haddrake Tor, Lysander led a drop pod assault to take the highest peaks. Once the area was secured he set up teleport homers, allowing the Terminators of the 1st Company to teleport in and assault the lower levels. However the heretics were able to manipulate the warp and caused the deaths of several Terminators, as they materialized embedded in stone or over deep precipices. Lysander himself witnessed the death of the 1st Company's Captain Kleitus and from him received the Fist of Dorn, a mighty Thunder Hammer which he used to go on and conquer the heretics.[3]

Due to the sudden destruction of much of the 1st Company, Lysander was promoted to First Captain, Master of the 1st Company, Overseer of the Armoury and Watch Commander of the Phalanx. He went on to lead the 1st Company for many years and perfected the tactic of teleporting multiple Terminator Squads into enemy positions. Lysander was often at the head of such assaults, leading some to believe him to be reckless and foolhardy, but fortune thus far had been kind to him. One of his most notable success was during the campaign against the Alpha Legion in the Jorgurd Cluster. After tracking down the Legion's cruiser to a hidden asteroid base, Lysander lead the boarding action to cleanse it of heretics, an effort that lasted for several hours of intense, close-quarters combat.[3]

Lysander and a force of Imperial Fists he was leading aboard the Shield of Valour disappeared in a warp storm and, after some time, were pronounced dead by the remainder of the Imperial Fists chapter. In truth, Lysander's ship re-emerged into Chaos-held space, caught right in the gun sights of several Iron Warrior spacecraft. Lysander and the survivors of the ensuing barrage were taken by the Iron Warriors under Warsmith Shon'tu to one of their accursed fortress worlds, Malodrax, and tortured. Eventually Lysander, without weapons or armour, escaped with a handful of others and fought their way out to freedom. When he returned to the Imperial Fists Chapter, a millennium had passed in the material universe. For six months he was thoroughly screened by apothecaries, chaplains and librarians, but after finding no taint, Lysander was reinstated to his position as Captain of the 1st Company. Lysander then led a force to raze the Iron Warriors from Malodrax and laid it to waste, thereby achieving vengeance.[1]

Lysander has continued his illustrious career in the Imperial Fists. He commanded Task Force Gauntlet on planet Vernalis in Segmentum Obscurus, a mixed force of 1st Company, elements of the 5th Company, and several Scout squads of the 10th Company, and defeated Chaos warband consisting of Emperor's Children Legion, traitor guard regiment Roaring Blades and daemons that were led by arch-traitor Sybaris. [2a][2b]. In 998.M41, he defeated the Iron Warriors Warsmith Shon'tu in the Battle for the Endeavour of Will, earning the Warsmith's eternal hatred in the process.[4] He also has apprehended the mutant Soul Drinker Sarpedon.[Needs Citation]

However his career has not been without controversy. Sometime in M41 Lysander once again engaged Shon'tu and his Sons of the Forge in the Invasion of Taladorn. During the battle, which he saw as his own opportunity for vengeance, Lysander repeatedly refused Ultramarines and Blood Angels aid, resulting in higher Imperial Fist casualties. In the aftermath of the battle Lysander was recalled back to the Phalanx to meet with Chapter Master Vladimir Pugh and the eight surviving Company Captain's. In the ensuing testimony half of the Chapter Council agreed with Lysander that the defeat of Shon'tu was a glory for the Imperial Fists alone and the division saved him from the demotion Pugh hoped to carry out. Pugh however ordered his own lighter sentence, removing Lysander from Command of the 1st Company and instead placing him as Captain of the 3rd, which suffered heavily during the Battle of Taladorn. Lysander had no choice but to obey, and was assigned to lead the newly reformed 3rd Company in the Crusade of Thunder.[5a] Later, after the death of Vladimir Pugh in the Infestation of Drashin Lysander is offered the position of Chapter Master, but refuses the honor.[5b] He has since instead been restored full command of the 1st Company.[8]

Lysander is most famous for wearing his suit of Terminator Armour and carrying the Fist of Dorn and a Storm Shield. His armour is also highly embellished with purity seals and incorporates a teleport homer.[3] 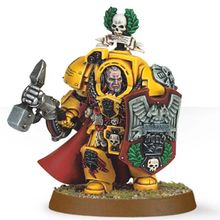