From Warhammer 40k - Lexicanum
(Redirected from Daughters of the Emperor)
Jump to: navigation, search 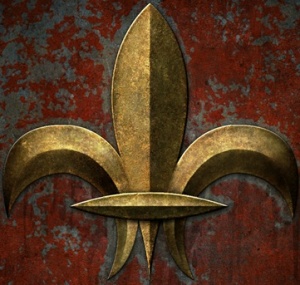 The symbol of the Adepta Sororitas.[13]

The terms "Adepta Sororitas" and "Sisters of Battle" are commonly assumed to mean the same thing, but the latter title technically refers only to the Orders Militant - the military arm of the organisation which is the largest and the best-known part of the Sororitas. 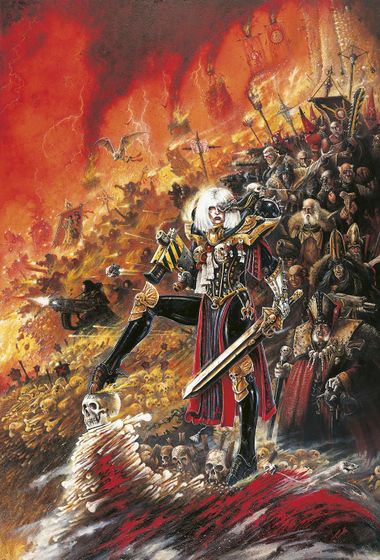 Daughters of the Emperor

The Adepta Sororitas date their founding from the 36th Millennium, and more specifically from the later events of the Age of Apostasy. The Adepta Sororitas trace their origins to the world of San Leor. An order known as the "Daughters of the Emperor", an all-female cult dedicated to worship of the Emperor, had been discovered on San Leor by members of the Ecclesiarchy. Goge Vandire, the High Lord of the Administratum (and also Ecclesiarch of the Adeptus Ministorum), decided to visit San Leor and recruit the Daughters into his own private army. The Daughters at first refused to accept his authority. Vandire decided to show them that he was blessed by the Emperor - he instructed a soldier in his entourage to shoot him, which after a brief hesitation, he did. However, thanks to the protective field generated by the Rosarius of the Ecclesiarch (which no one but Vandire himself was aware of), Vandire was not harmed. The Daughters took this to be a sign, and swore allegiance to Vandire virtually on the spot. They were renamed the Brides of the Emperor, and became Vandire's most loyal followers.[1a]

During the Siege of the Ecclesiarchal Palace, the Adeptus Custodes, the praetorians of the Emperor himself, tried to approach the Brides and convince them of Vandire's treachery. In a last ditch effort to convince them, the Custodes took Alicia Dominica, leader of the Brides, and her chosen bodyguards deep into the Imperial Palace where they stood before the Emperor himself. What happened there remains unknown - Dominica and her companions were sworn to secrecy - but it became clear that the Brides, who reverted to the title of Daughters of the Emperor, had been awakened to the evil that Vandire represented. Marching into his audience chamber, Dominica paused only to condemn Vandire for his crimes before she beheaded the power-crazed dictator. Reportedly, Vandire's final words were "I don't have time to die - I'm too busy!"[1b]

After this episode, the newly appointed Ecclesiarch Sebastian Thor proclaimed the Decree Passive which forbade the Ecclesiarchy from having "men under arms". Under the literal interpretation of the decree the Adepta Sororitas, being female, were not obligated to disband. Thor, recognising the need for the Ecclesiarchy to have some kind of force and internal regulator, allowed them to remain even if the spirit of the decree was rather blatantly disregarded.[1c] 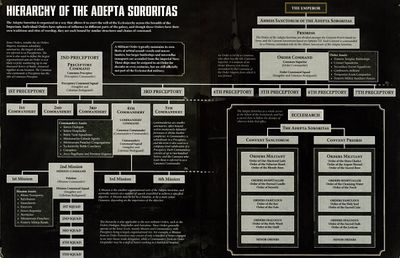 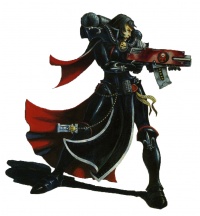 A Battle Sister of the Adepta Sororitas[7]

The Adepta Sororitas is part of the Ecclesiarchy and is divided between two Convents - the Convent Prioris located on Terra and the Convent Sanctorum based on Ophelia VII, although in practice their forces are spread throughout the Galaxy.[1d]

Below the Abbess are the Prioresses of the two Convents who are in charge of their Convent and the various Orders based there.[1d]

The Convents of the Sisterhood are organized into several Orders. There are two different kind of Orders: The Orders Militant, or Sisters of Battle, the military arm of the Ecclesiarchy composed of the six Major Orders and countless subsidiary Lesser Orders Militant; and the Non-Militant Orders, each of which has differents roles and responsibilities in the Imperium.[19a][19b]

The largest of the Non-Militant Orders rival the Sisters of Battle in size and notoriety, but there is also hundreds of other orders, the vast majority of which are unknown to the bulk of Mankind. The most well-known are the Orders Hospitaller, composed of surgeons, physicians and nurses, the Orders Dialogous, scholars dealing with languages, cyphers and translations, and the Orders Famulous, acting as diplomats, chamberlains and advisors for Imperial noble families[1d][1e]

It is not uncommon for a Sister to transfer from one of the Orders to another, particularly if a Battle Sister has become injured or is too old for combat they may transfer to one of the non-militant Orders.[3a]

Each of the major Orders follows the same basic hierarchical structure[2c]:

It should be noted that the non-militant Orders operate mainly at Mission and Commandery levels - Preceptory is a largely organisational tier. For example, a Commandery of the Order Hospitallier could be a staff of sisters working in a field hospital whilst a Mission of the Orders Famulous could be a handful of Sisters engaged in a trade delegation.[2c]

A Sister of Battle[14b]
Main article: Sisters of Battle

Commonly known as the Sisters of Battle, the Orders Militant are the most numerous and well known of the Adepta Soritas. They are the only official fighting force of the Ecclesiarchy and often prosecute Wars of Faith. They also form the Chamber Militant of the Ordo Hereticus and often fight alongside the Inquisitors of that Ordo.[2b][2c]

Since their founding the Major Orders Militant have established a number of subsidiary convents at sites significant to the Ecclesiarchy. Sometimes little more than small Garrisons, these bases have developed identities distinct from their parent Orders over time, eventually becoming separate Orders all together. These smaller Orders are referred to as the Orders Minoris or Lesser Orders Militant. In theory the leaders of the Lesser Orders are answerable to the leaders of the Major Order that spawned them.[2a]

A Sister of the Orders Hospitaller[15]

The Sisters Hospitaller are surgeons, physicians and nurses. They aid the poor, and heal the sick and the wounded in many hospitals and clinics of the Sisterhood and serve in all departments of the Imperiums armed services except the Adeptus Astartes.[2c]

A Sister of the Orders Dialogus[16]

The Sisters Dialogus help to translate the innumerable dialects and slangs used throughout the Imperium.[11] At the behest of the Inquisition and certain parties they also study Xenos languages[4], also translating texts obtained from Xeno artefacts. Sisters Dialogous are often employed as Sages in Ordo Hereticus Inquisitors' retinues.

The Sisters Famulous organise and maintain households of certain Imperial governors[9] and Imperial nobles, serving as advisors and by their very presence reminding them of their higher loyalties. They oppose any disloyalty with the support of faithful followers from the inside of the household itself[8].

The Sisters of the Orders Sabine accompany the Missionarius Galaxia on missions to rediscover new worlds. The Sisters specialise in infiltrating primitive societies and introduce elements of the Imperial Creed to the natives.[3b]

Specialise in the retrieving, guarding, studying and repairing of artefacts of value to the Ecclesiarchy.[3b]

The Orders Planxilium form thousand-strong processionals leading weeping and wailing pilgrims upon the remembrance and high holy days of Veneris.[19b]

The ‘dark sisters’ of the Orders Vespila are tasked by Cardinal Kregory Hestor with the sanctification of the bodies of fallen kin, and are sometimes called upon to serve as forensic specialists when a Throne Agent has recourse to disinter a long dead corpse.[19b] 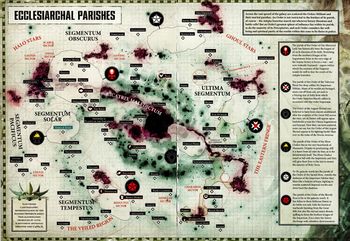 Deployments of the Adepta Sororitas[25a]

Maintain the glass paneling of Imperial shrines and cathedrals.[25b]

Ranks of the Orders Militant 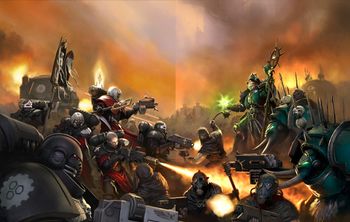 Though it is rare, Adepta Sororitas have fallen to Heresy, despite the Imperium's public declaration that it is not possible. Once this occurs, the Sororitas' Orders go to great lengths to both prevent it from becoming known and to remove the stain on their honor. This includes hunting the heretical Sisters down and having them quietly killed, while also having their existence erased from the Imperium's history. Some Orders even have a pure Sister, undergo surgery to assume a Heretic's face and identity, in order to keep the truth from being discovered.[26]