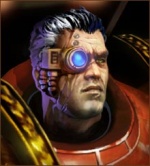 Captain Davian Thule is a long-serving officer of the Blood Ravens.[1],[2] 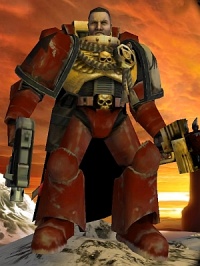 When the Chaos witch Morga seduced the Planetary Governor of a once-prosperous and loyal Imperial colony, the Blood Ravens retaliated, purging the world of all life. Morga however, survived. She proved to be a deadly foe and slew the Blood Ravens expedition leader and most of his staff. It was the young Blood Ravens Initiate Davian Thule who ultimately killed her, proving his mettle early on.[1a]

Captain Thule commanded the three Blood Ravens companies deployed to Kronus to purge the Necron presence there. He ordered to Governor-Militant, Lukas Alexander, to evacuate all civilians and Imperial Guard personnel, but Alexander refused, which forced the Blood Ravens to fight the Imperial soldiers to achieve their objective. Thule regretted having to kill his fellow brothers-in-arms, but orders were orders.[1b]

Thule treated the remnants of the shattered 1st Kronus Regiment with honour, arranging transport off-planet for the surviving Guardsmen, and giving Alexander's body a formal military burial. On the other hand, the soldiers of the rebellious 5th company, who had mutinied against the Regiment and fought with the Blood Ravens during the final battle at Victory Bay, were executed for disloyalty.[1b] Nevertheless, the survivors of the regiment bore a deep hatred for the Blood Ravens.[Needs Citation]

Thule and the Blood Ravens Second Company also succeeded in their mission to wipe out the Necrons of Kronus, with Thule personally planting the bomb deep within their catacombs beneath Thur'Abis Plateau. The Second Company later adopted the motto "Victory Over Death" in reference to this great victory.[1c]

Thule himself suffered grievous wounds in the final battle with the Necron Lord, including the loss of his right eye. Nevertheless, he survived and led the Blood Ravens to victory. His lost eye was later replaced by a augmetic one.[2]

In the aftermath of the Kronus Campaign, the Inquisition arrived to question the Blood Ravens' actions, but the commanding officers managed to finagle their way through the interrogations by claiming they were just "following orders" from their Chapter Master.[1d]

Captain Thule was made commander of Space Marine operations in Subsector Aurelia and charged with protecting the Blood Ravens' recruiting worlds of Calderis, Typhon Primaris, and Meridian. Thule's men were at the forefront of the fighting on Calderis when the Tyranid swarm initially made planetfall. Holding the line at the cost of many of his men, Davian Thule was mortally wounded in the attack. While an Astartes would normally be able to recover from the types of wounds he sustained, a highly volatile Tyranid poison was ravaging his body, which forced the fleet's Apothecarion to put Thule into stasis. Sergeant Aramus, assuming command as Force Commander, was tasked with recovering samples from Tyranid organisms across the subsector to help create an antidote to the poison.[2]

Davian Thule in his Dreadnought body[2]

With these samples, Apothecary Gordian and Techmarine Martellus were able to revive Captain Thule inside a Dreadnought chassis. For a short time, Thule's perception was hazy and he had trouble communicating with his fellow Blood Ravens, even mistaking Sergeant Thaddeus for Gabriel Angelos. Eventually, Thule's memory cleared and he once more became an invaluable part of the Blood Ravens defending the sector.[2]

Cyrus later revealed that Thule had found and read records of the Blood Ravens' origins during the Kronus Campaign, but destroyed them. While it is likely that the documents did not reveal the corruption in the Chapter's ranks, the revelation that the Blood Ravens have possibly descended from a traitor Legion could have potentially torn the Chapter apart.[2]

Thule may have been killed or at the very least had his Dreadnought armour critically damaged by Eliphas on Typhon. The two met in combat shortly before the Ordo Malleus arrived in the sector to begin Exterminatus.[3]

On Kronus, Thule was armed with a standard-issue Chainsword and Bolt Pistol, which he was later able to swap for a Daemonhammer and Meltagun, or the Power sword Alexian's Blade.[1b]

Before his conversion into a Dreadnought, he wielded a Heavy bolter and wore a master-crafted Power armour.[2]

He also carried the Power sword "Wisdom", which later passed on to Sergeant Aramus.[4]