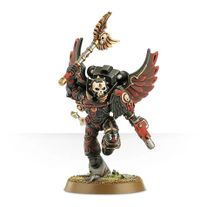 Soaring into battle on a crimson winged Jump Pack, the Death Company Chaplain leads his fallen brothers in their final battle. As he smashes the enemy from their feet with devastating swings of his crozius arcanum, the Death Company Chaplain booms a constant litany of hatred and vengeance, exhorting his brothers to give meaning to their sacrifice before their tragic and inevitable end.[1]

Simple zealotry is not enough to recommend a Blood Angels Chaplain for elevation to the rank of Death Company Chaplain. Rage and hatred are useful tools, but they are nothing without control. The role of the Death Company Chaplain is much more complex, and more sacred, than simply inciting his brothers to new heights of wrath in battle. This deeply spiritual warrior acts as the light of the Angel himself, a guiding illumination that those brothers lost to the Black Rage can follow into glory and death. In battle, he maintains himself as the beacon of sanity.[1]