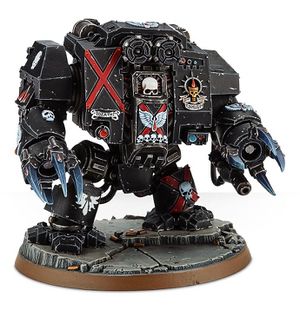 The Death Company Dreadnought is a Space Marine Dreadnought pattern used by the Blood Angels and their Successor Chapters.[1]

The Blood Angels' fiercest warriors are entombed in a Dreadnought when mortally wounded and their bodies can fight no more. But even the Blood Angel buried deep within the sarcophagus cannot escape the maddening Black Rage that affects all the Sons of Sanguinius. A Dreadnought can wreak havoc on any battlefield and with a Blood Angel who has fallen to the Black Rage they become unstoppable.[1]

Even when the battle has been won, the maddened Dreadnought cannot be subdued and will often rampage for days afterwards until a Techmarine is able to shut down the war machine. Only then can the decision be made to either allow the occupant who has succumbed to the Black Rage to continue into the next battle or be replaced with one who has yet to fall into madness.[1]