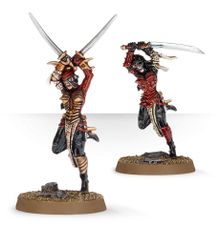 A pair of Death Cult Assassins

Death cults are extreme cults characterized by their worship through bloodshed, and can be found on many Imperial worlds.[1]

While many of these cults serve Khorne the Blood God, others are extreme sects of the Imperial Cult and fanatically loyal to the Emperor of Mankind. As the Emperor sacrifices himself for mankind's continued survival, these cults in return slay the enemies of the Emperor, offering them as sacrifices. Death cult assassins are often utilised by the Inquisition, the assassins' skill in the arts of killing making them excellent executioners and infiltrators. They employ exotic ritual weapons for their work: stilettos and blades backed by digi-weapons and needlers.[1][2]

They specialize in ritual murder and assassination with the art of the blade being paramount to the Cult. Different forms of incisions, lacerations, punctures, the type of the weapon used, the part of the body that has been struck all have special significance to dedicating the soul to the Emperor. Many of the ritual weapons used and lovingly maintained by the Cult are highly specialized. They range from knife-rings to whip-scythes with more fanciful and symbolic weapons including cross shaped throwing knives or knives made from the bones of the faithful or heretical.[2]

Death cultists are quite frequently cannibals and haemovores in that they drink the blood of their victims. Death cultists believe they become purified by consuming the blood and flesh of a slain enemy, and that by doing so they have taken their enemy's prowess and soul. Often blood is siphoned off from the dead as offerings to the Emperor and it is quite common for Death Cultists to make pilgrimages to a great cathedral of the Ecclesiarchy in order to present their gift to the Master of Mankind.[2]

The Death Cultists are experts and cold-blooded killers who can stalk their prey for hours or days, waiting for the right moment to strike. Then, a sudden explosion of power and speed occurs as the assassin makes numerous cat-like leaps from the shadows with blades extended that sever limbs or disembowel their target with savage grace. This makes them valued companions to an Inquisitor who turns a blind eye to their eating habits and some are even sent to the Officio Assassinorum for further training.[2]