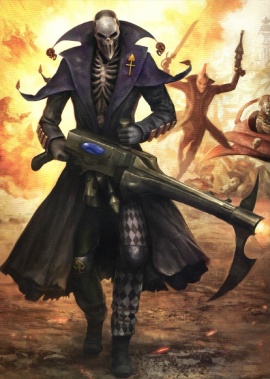 Death Jesters stand apart from the rest of the force, providing much of the masque's heavy weapon support. In performance, their role is to play Death—they perform death-defying stunts and escapology. They are known for their morbid and ironic sense of humour,[1][4] and their mocking laughter is known to signal impending death.[2] The macabre uniform of the Death Jester is constructed from the bones of the troupe's previous Death Jester—and when one dies, his bones are used to fashion his successor's costume.[3]

Death Jesters seek new and inventive ways to terrorize and eventually kill their victims. They can sometimes be heard humming softly in the midst of battle, and will occasionally pause to bow or offer mocking applause to a foe. Killing a foe is not enough for a Death Jester. To make war worthwhile, they must intersperse murder with ironic humor. Slaying an officer at a crescendo of a rallying speech or sending sappers fleeing into a minefield they just got finished laying are examples of this macabre sense of humor.[6]

The Brotherhood of Death Jesters have since allied themselves with the Ynnari. They believe that to bring a god of death into existence, destroying Slaanesh through the demise of the race that birthed the ancient nemesis, would be the greatest jest of all. [7]

Death Jesters use clothing and equipment which feature skulls and death motifs. They wear carapace armour enhanced with visual disruption and conversion field technology. As the heavy specialists of the army, they carry an array of deadly weaponry, from the conventional Shuriken Cannon of the Craftworld Eldar, to the specialised Firepike, or the morbid Shrieker Cannon. The Shrieker Cannon is the trademark weapon of the Death Jesters, as only they create and maintain them. They are a variant of the Shuriken Cannon, but instead of firing a hail of projectiles, they fire only a single shot. This shot is impregnated with a virulent acid that causes the victim's blood vessels and insides to expand violently. This usually results in a small explosion that showers squadmates with pieces of their companion.

The weight of their weapons is offset by their flip belts. They are also known to use vortex grenades.[1]