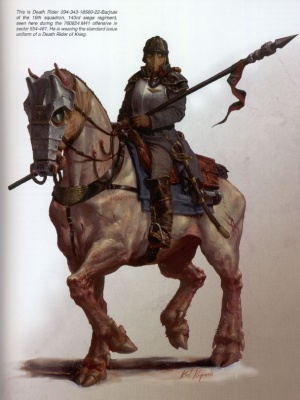 Death Riders are the cavalry branch of the Death Korps of Krieg regiments of the Imperial Guard. Akin to standard Rough Riders, Krieg Death Riders provide fast moving troops to exploit the breakthroughs made by infantry attacks, or operate on the flanks of offensives. Death Riders are chosen not only on their aptitude but also capacity for independent thought and initiative, traits which serve them well as future officers should they survive.[1]

Death Riders fulfill a number of roles within Death Korps siege regiments. As battlefield reconnaissance units they take the place of Sentinels and ride out far ahead of or on the flanks of the main force to scout the enemy's disposition, and are used as shock-troops to smash through the enemy's battlelines. They are also held back as mobile reserves during battle, either to counter-attack or press a breakthrough themselves. Once the enemy has been routed Krieg infantry will hold their freshly-captured position while the Death Riders mercilessly pursue the fleeing survivors, a function for which they have gained a bloody reputation.[1]

Death Rider units are organized into companies, which are further broken down into squadrons. Each squadron consists of ten riders, including a Ridemaster to lead them. Each company consists of six squadrons led by a five-man command squadron, including a Lieutenant.[2b]

Death Riders for the most part carry the same equipment as infantrymen with some notable exceptions. Their uniforms are the same except they are issued tall, hardwearing riding boots instead of the low marching boots and an ornamental breastplate. Made of plasteel with a chrome facing, the cumbersome item is worn more out of tradition than anything else, and often discarded to save weight when performing reconnaissance missions. For long-range patrols extra supplies of rations, chemical filters and other important necessities are carried in saddlebags. Instead of the standard respirator Death Riders are issued the Type V model, which is identical save that the regulator unit is carried in a canister and worn on their back.[2a]

The Death Rider's primary weapon is the Hunting Lance, a hollow lightweight metal shaft measuring 3.5 meters long and tipped with a shaped charge spear point. Upon impact a small explosive is detonated, with the blast and fragmentation effect is directed forwards towards the enemy, and the lance is discarded. Though useful in an initial charge it is unwieldy in close quarters combat. His back-up weapon is a 95 cm long heavy-bladed sword used specifically for thrusting: ending in a sharp "spear" point the blade is designed to resist buckling upon impact during a charge, while the bowl hand guard provides additional protection and the weapon's grip causes it to naturally align with the arm when extended. A laspistol, while also carried, is seen as a weapon of last resort and ill-suited for normal usage.[2a]

The most impressive piece of equipment issued to Death Riders are their horses. The product of extreme genetic engineering, these distant relatives of ancient Terran horses are grown in vitaegenic cloning vats beneath the surface of Krieg and under the watchful eye of the Adeptus Mechanicus Magos Biologis, who individually number brand them. Nearly hairless, with a longer neck and broader shoulders and girth, these horses' superior strength and splayed feet allow them to power through thick mud and leap trenchlines easily, while numerous additional organs including osmotic lungs allow them to survive unscathed on even the most toxic battlefield. Sub-dermal organic armoring and a fully-integrated drug injection system with combat stimulants and palliatives not only makes Krieg horses fearless in battle but far more aggressive than normal and virtually impossible to put down short of massive bodily trauma. However the horse's unstable body chemistry must be constantly monitored by the Death Rider and counterbalanced with additional chemicals.[1][2a]