The Death Spectres are a Space Marine Chapter. Stationed beyond the boundaries of the Imperium, they maintain a careful watch over the Ghoul Stars to ensure that their supernatural inhabitants never again threaten the galaxy.[1a]

The date of the Death Spectres' Founding is unknown, though they are speculated to be of the 13th Founding.[2] 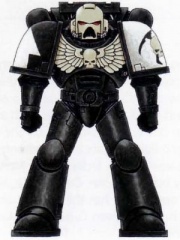 Their parent chapter is the Raven Guard.[7a] Their founder, Corcaedus, brought the Death Spectres to Occludus after receiving a vision from the Emperor Himself, which directed him to a secret cavern underneath the world's surface containing a xenos artifact of immense power, the Shariax.[7f]

It is a closely guarded secret that each successive Chapter Master of the Death Spectres (known as the First Spectre, or in the Occludan dialect of Low Gothic, the Megir), upon his ascension, takes his place on the Shariax (the Throne of Glass) and does not step down again until he is dead. The Shariax grants some power to the Death Spectres that is vital to maintaining their watch over the Ghoul Stars, at the cost of draining the Chapter Master's life.[7g] Although he is semi-capable of directing the affairs of the Chapter, most daily command decisions are made by the Menrahir, the Chapter Council. Only the First Captain and the Chief Librarian have regular access to the Chapter Master.[7g][7h]

The Death Spectres have a special inclination towards Death and decorate their heraldry, armor, and fortresses with motifs associated with death and transcendence. They believe that those in die in battle will be reborn to once again fight in the Emperor's service. Upon death, battle-brothers are mummified and placed beneath Logopol, the Chapter's Fortress-Monastery.[9] Members of the Chapter utilize a special gesture known as the Masrahim known as the salute of skull and throne. This is achieved by placing the left hand palm up next to the abdomen then placing the right in the left hands palm as a fist.[10]

The Death Spectres are officially charged with protecting the Imperium from the horrors of the Ghoul Stars, but this protection does not extend to the local humans whom the Chapter mostly regards as potential breeding material to produce Aspirants. The Death Spectres are perfectly willing to let human worlds in the Ghoul Stars die, as long as saving them is of no benefit to the wider Imperium.[17]

The 1st Company of the Death Spectres is known as the War-Gheists and wield Power Scythes in battle.[9]

The Death Spectres recruit new members of the Chapter by scouring worlds for the best possible female candidates. They are taken to their homeworld of Occludus[9a] or nearby planets designated as "breeding worlds".[17] The population of these Death Spectre-held planets are then supposed to breed future Aspirants.[9a][17] To support its "breeding worlds", the Chapter raids human-inhabited worlds of the Ghoul Stars; as a result, the local humans often regard the Death Spectres as just as dangerous as Xenos horrors such as Necrons.[17]

Death Spectres lack a functioning Mucranoid and Betcher's Gland.[7b] Their gene-seed also suffers from relatively minor genetic mutations: all Death Spectres lose their hair during the gene-seed implant process,[7c] and their Melanchromic Organ does not work as intended; as a result, all Space Marines of this Chapter are albino.[3a]