The Deathwatch is a unique and specially trained Space Marine Chapter that dedicates its every hour to xenos hunting.[36a]

Known as the Shield that Slays[36a], they are the Chamber Militant of the Ordo Xenos, charged with protecting it in its search of information, containment, and ultimate destruction of all xeno species. Consisting of Battle-Brothers drawn from many Chapters, the Deathwatch operates from Watch Fortresses and Watch Stations across the whole of the Imperium. 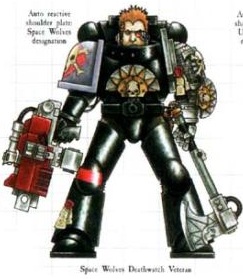 Rather than following the standard Codex Astartes organization, the Space Marines themselves are drawn from many different chapters. These chapters have sworn sacred oaths to raise a unit of Space Marines specifically for this task. The warriors are then gathered together to fight where and when they are needed. Giant fortresses orbit desolate worlds at the edge of the galaxy, keeping constant vigil over possible xenos forces. There are also several secret bases spread throughout the Imperium, which provide a launch site for their crusades.[Needs Citation]

The warriors who fight are given the honour of painting their armour black (to show their service to the Emperor), while leaving one shoulder pad with the original insignia of the Chapter from which the marine came. Although the armour is painted black, it is never all painted black as this action would dishonour the armour's Machine Spirit. They also are equipped with a new shoulder pad with the symbol of Deathwatch onto their other side. Once in the employ of the Deathwatch, there is no set length of time for service, rather it is as long as the commander deems necessary. Each Space Marine may serve a discrete amount of time, or for the duration of a mission, which may be a number of years. Once the mission is complete, the Space Marine is allowed to return to his chapter, under an oath of silence, as their duty has been fulfilled. How long a Space Marine is part of the Deathwatch varies greatly. It can last a single mission, decades, or even centuries. His length of service depends on a number of factors, not least of which are the immediate needs of his Watch Fortress.[42]

The orders of the Deathwatch are not merely the cleansing of xenos cultures. They also include the recovery and study of alien devices and artifacts. Sometimes it is necessary to use a weapon against the enemy who created it, although this is not taken lightly. The Deathwatch are constantly vigilant for sabotage, or to advise if it is truly safe to use a weapon of xenos origin. The Adeptus Mechanicus are always on the lookout for alien technology; the C'tan Phase Sword, used by the Callidus assassin was recovered from a Necron tomb world and successfully integrated into the arsenal of the Imperium.[Needs Citation]

Usually, a Deathwatch team is led by an Inquisitor, but in extreme circumstances, a Deathwatch Captain or Librarian may take command of the unit. Their word is law, and can requisition anything they desire to complete their objective. They are the best armed and trained units in the Imperium. They might be deployed in areas where conventional methods are insufficient or if the troops available are not properly equipped or trained for the task. The presence of a Deathwatch team is always welcomed, even though they are feared by all those who know of them.[Needs Citation] 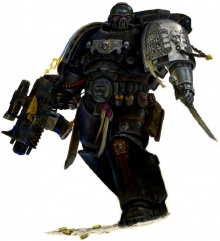 The seeds of the Deathwatch were first sown during the War of the Beast, when a mighty warboss known only as The Beast nearly destroyed the Imperium.[28a] During the war, Lord Commander of the Imperium and Chapter Master of the Imperial Fists Koorland realized that small Kill-Teams of Astartes were required to eliminate The Beast and key strategic assets. Needing experience and knowing that no new Foundings could be created in such a short time, the recruits were to be drawn from a multitude of existing Chapters. Despite the reluctance of the High Lords of Terra to approve the creation of this force, desperation forced their hand. The original recruits were drawn from units of survivors of Koorland's invasion of Ullanor which saw heavy Astartes losses. Thus standing in vigil of their fallen brothers, the Deathwatch came to be. Their first mission was to eliminate the Ork Attack Moon plaguing Terra.[29] Shortly before the second invasion of Ullanor to try and slay The Beast, Koorland reached a power-sharing agreement with Inquisitorial Representative Wienand to try and avert crisis with the suspicious High Lords of Terra. It was agreed that the Deathwatch would fall under the purview of the Inquisition but that a Space Marine would serve as a Chapter Master. The first Chapter Master of the Deathwatch, known as the Watch Commander, was Asger Warfist.[30]

An account from older editions states that centuries ago, a Conclave of Ordo Xenos Inquisitor Lords, known as the Apocryphon Conclave of Orphite IV - convened with the purpose of formulating a galaxy-wide strategy to combat the many xenos civilizations assailing mankind. Foreseeing an age where mankind would eventually consume the Imperium itself, the conclave sat and debated for many years. Some advocated the annihilation of all xenos, some that certain less-violent civilizations should be "tolerated". However a strategy was eventually formed and the Conclave requested an audience with many assembled Chapter Masters of the Adeptus Astartes. After hearing the Inquisitor's pleas, the Chapter Masters deliberated for one night before giving their verdict: they and the Inquisitors would together take a solemn oath and form a new Chapter, one drawn entirely from Battle Brothers from existing chapters. The alliance dubbed it the 'Deathwatch', for it would stand guard against the doom foretold by the conclave.[7b]

The Mantis Warriors were once second only to the Crimson Fists in the amount of recruits sent into service in the Deathwatch. However after the Badab War, the Chapter would not be requested to join the Deathwatch's ranks due to the Inquisition's view of the Mantis Warriors' heresy during that conflict. This would last for nearly a hundred years, until Librarian Shaidan, Sergeant Soron and Brother Ruinus were seconded to Inquisitor Kalypsia's Deathwatch Kill Team. However, the Mantis Warriors were not full-fledged members - merely filling in for the losses the Kill Team sustained in a Tyranid ambush on Herodian IV (in particular, the three members kept their Chapter colors during this mission and wore no iconography of the Inquisition or the Deathwatch).[10] 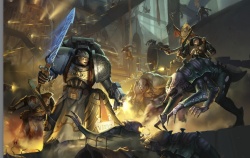 The Deathwatch has developed several distinct tactical deployments over its long history, developed over its wars against Xenos. These tactical methods are taught at every Watch Fortress and are used to determine the composition and armament of Kill-Teams.[28b][36c] 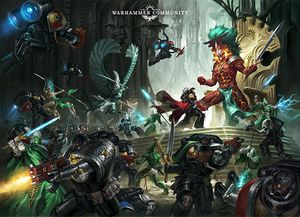 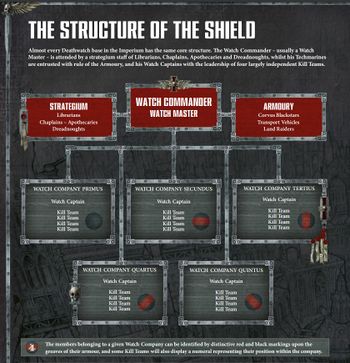 Due to its vast mission the Deathwatch is scattered across the galaxy on Watch Fortresses and Watch Stations, the largest of which is Talasa Prime. Until the formation of the Great Rift Talasa Prime was also the primary training station of the Deathwatch, but the dangerous travel from Imperium Nihilus has seen this disrupted. It is said that within Imperium Nihilus such duties now fall to Fort Excalibris and Praefex Venatoris. Each Watch Fortress is a sovereign domain standing sentinel over an area of the Imperium, each having its own number of Watch Stations. The structure of most Watch Fortresses are identical, with ultimate responsibilities falling to a Watch Commander who is supported be a strategic council of Watch Captains and Lieutenants. Each Watch Fortress also has its own Librarius, Apothecarium, Armoury, and Reclusiam. The Watch Fortress Commander is the highest level of command within the Deathwatch, no single Chapter Master exists due to the vastness of their missions and deployments.[42] However initially during the War of the Beast, the Deathwatch did have a Chapter Master.[30]

Each Watch Fortress typically has five Watch Companies, each of which is headed by a Watch Captain. Most Watch Companies are smaller than their Codex Astartes equivalents and usually comprise no more than 50 Battle-Brothers. Each Watch Company is then further divided into Kill-Teams, specialized combat units consisting of Marines from various Chapters. The formations of these Teams is extremely flexible and dependent upon their specific mission. No two Kill-Teams are ever the same, with one comprising Veterans wearing Terminator Armour while another may field Bikers and Jump Pack equipped infantry.[42]

The Deathwtach is highly integrated with the Ordo Xenos of the Inquisition, acting as its chamber Militant and frequently working alongside its Inquisitors.[7]

Deathwatch members have access to a range of specialist equipment such as the Stalker Boltgun and variant bolter ammunition such as Inferno Bolts, Cryo-Shells, Kraken Penetrator Rounds, Metal Storm Frag Shells and Stalker Silenced Shells.[1] Their devastating array of weaponry includes carapace-shredding Shotgun shellds known as Xenospurges and grenades containing chemically altered promethium. Ammunition canisters of phasic plasma and amplifiers that saturate grav-fields with warped ions are among their most closely guarded secrets. Their molecular realignment fields of Xenophase Blades in particular arouse interest most radical Xenarite cults of Tech-Priests. Their technology is not only designed to kill but also includes Archaeotech to disrupt alien mechanichanisms such as Ork engines and Eldar psychomaterials.[42]

The Deathwatch is freed from the usual technological dogma that plagues the Imperium and their arsenal also consists of vast amounts of Xenos technology. Their wargear is highly specialized and reflects the varied requirements of their mission and vast array of potential threats. Development of weapons often includes Apothecaries, who specialize in analyzing maximum bio-damage to enemy xenos. Their equipment is produced by specifically vetted Tech-Priests sworn to secrecy and regularly put under hupno-therapy to allow for maximum discretion.[42]

The most widely used aircraft by the Deathwatch is the Chapter-exclusive Corvus Blackstar.

The Deathwatch operates its own fleet, and most notable of these ships are Kill-ships, specialized bombardment craft to enact Exterminatus upon worlds lost to the Imperium. The Deathwatch often deploys from Inquisitorial Black Ships for planetary strike operations.[7] 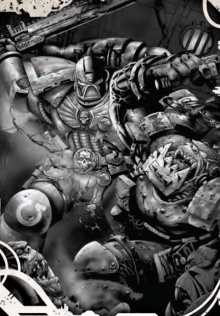 Notable ships of the Deathwatch 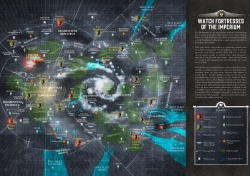 Deployments of the Deathwatch across the Galaxy 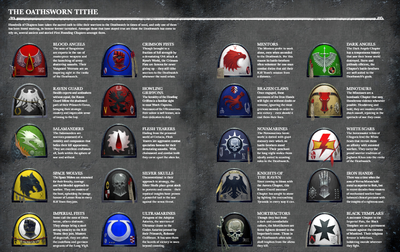 Chapters tithed to the Deathwatch[36d] 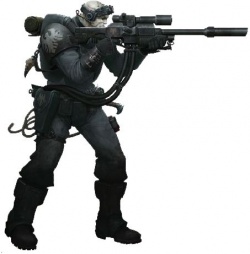