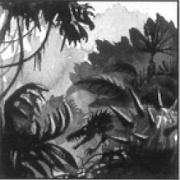 Image of the Death World

A δτ-class[2] or Death World (sometimes spelled as Deathworld[6]) is a planet in which the native flora and fauna has evolved into naturally aggressive and dangerous forms. These eco-systems are finely balanced between continual destruction and lightning-fast reproduction. Death worlds take many forms, ranging from jungle-covered hell-holes with carnivorous plants and animals to barren, volcanic wastelands racked by ion storms. The most famous and notorious Death World is the hellish planet of Catachan[2]

Humans can, and do, live on these worlds, but it is a never-ending struggle. On many death worlds it is as if the entire bio-mass of the planet were consciously motivated against human settlement - concentrating forces against intruders to destroy them.[1] Death worlds with human settlements or colonies can have populations of 1,000 to 15,000,000.[2]

Death worlds are not usually inhabited, and are nearly impossible to colonise but still need to be explored, which means the establishment of outposts and other support facilities. Some planets have rich mineral wealth, animal life, vegetables or gases, so tithes might range from Solutio Tertius to Solutio Prima.[2]

Some Imperial ledgers refer to a Death world as In Articulo Mortis — "at the moment of demise". The planet Caliban was referred to as such prior to its destruction.[5]