"Once you are marked, there is no escape." - Illic Nightspear, Master of Pathfinders"[2] 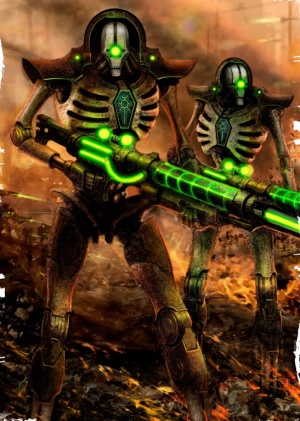 Deathmarks are Necron snipers and assassins.

Even when they existed as the Necrontyr in flesh bodies, Deathmarks had a reputation for precision and patience. Like most Necrons, their technology lies far beyond the realm of mortal comprehension and they can effectively slip in and out of dimensions at will. Their victims will assume that they have been ambushed, and that the Deathmarks teleported onto the battlefield. The reality is that they were already there, waiting for just the right moment to lay their trap and catch their prey with their Synaptic Disintegrator rifles.[1]

Due to their nature as agents of assassination and ambush, the ancient codes dictate that Deathmarks cannot be deployed against nobility or other "honourable" races. This matters little however, as Necrons consider most alien foes to be not worthy, unless they prove otherwise on the battlefield. Since almost no one has lived to tell the tale of a Deathmark attack however, this gives all save the more traditional Nemesors free reign to deploy them against any alien they wish.[2]

When fighting, Deathmarks reside in a pocket dimension; a hyperspace between now and then, and can from here observe the battlefield, and even tap into enemy transmissions, only to materialize and strike when they deem the opportunity to be right, or from orders of their commander. When a target has appeared, they exit their dimension and place a mark in the shape of a green halo over the head of their target, which allows them to track it no matter where it runs - hence their name.[2]

Deathmarks who fall to the Destroyer curse, are known as Hexmark Destroyers.[3]