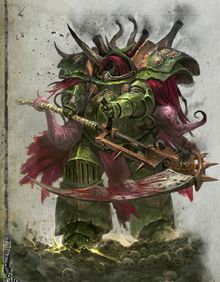 The Deathshroud were the elite bodyguard unit of the Death Guard Space Marine Legion during the Great Crusade.[5a][5b]

Great secrecy surrounded them; they were chosen from the rank-and-file of the Death Guard by their Primarch, Mortarion, personally for their skill at arms, fearlessness and proven endurance - often being the sole survivor when the rest of their squad has perished.[5b] Their identities were a mystery, since, after being inducted into the Deathshroud, they never spoke, never removed their helmets even in death, and were officially listed as being killed in action.[1a] 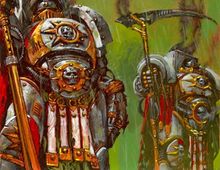 Deathshroud bodyguards were clad in highly artificed Terminator armour that gave them a tall and barrel-chested appearance. They were armed with hand flamers with chem-munitions and, like their master, they wielded large power scythes known as Manreapers. They never strayed more than 49 paces from their Primarch.[1a][5b] An intimidating presence, they were capable of achieving a uniformity so perfect that when at rest they gave the impression of grand statues, and when in motion, of mechanical automatons.[1c] Mortarion was customarily attended by two Deathshroud at any one time, but there may have been more.[1a][1b]

In the Battle of Iota Horologi, the Deathshroud accompanied their lord in a boarding action of a cylindrical Jorgall worldship.[1b]

Before an attack on the Knight world of Molech, Mortarion killed all seven of his Deathshroud bodyguards with a single stroke of his Manreaper, Silence, inside the gene-vault aboard his flagship, Endurance, in order to feed the emerging daemon essence of Ignatius Grulgor, who had been killed on Isstvan III by the the Life-eater virus.[4]

As a Daemon Prince of Nurgle, Mortarion was still accompanied by his Deathshroud ten thousand years later, notably when he confronted the Grey Knights at the Battle of Kornovin.[3]

Today, the Deathshroud serve as Mortarion's representatives, and while they still often fight by his side they also form the honour guard for Chaos Lords, Plague Surgeons, and other champions of Chaos which have garnered Mortarion's favor. Their presence is a mixed blessing at best. The Deathshroud will fight with all their skill and strength in support of their assigned champion, and prove to be an undeniable asset in battle. Yet all the while the Deathshroud are judging upon their master’s behalf. If the champion is successful, the Deathshroud depart at battle’s end, leaving as silently as they came. If their charge fails in his duties, however, the judgement of Mortarion is swift, deadly and utterly inescapable.[Needs Citation]