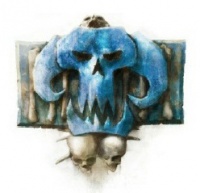 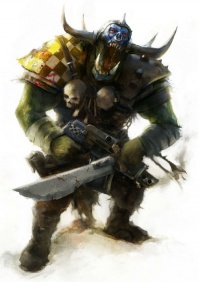 The Deathskulls (sometimes written as Death Skulls) are an Ork clan

The Deathskulls are a clan of looters who grab whatever they can from corpses on the battlefield, although they aren't above taking things from other Orks who aren't watching. They collect anything that might be useful, as well as various lucky trinkets and charms, and even junk and whats-its that "might come in 'andy later'". Deathskulls would make capable scientists and excellent engineers if their fascination for new things lasted longer than the time it took to steal them. They have a bad reputation with other Ork clans, as they are seen as scheming thieves.[1]

They are superstitious even for Orks, and often paint themselves blue (which Orks feel is a lucky color) to protect themselves from harm. Meks play an integral part of Deathskull society, because it is they who build guns, tanks, and all other manner of wargear out of the bits and gubbins found on the battlefield by their less technologically inclined brethren. Deathskull Meks are proficient at constructing Kustom Kombi-weapons, due to the large amount of random weaponry they have a habit of ending up with. Many Lootas are affiliated with the Deathskulls clan who, being a dangerous band of grubby-fisted thieves, welcome their Loota brethren with open arms.[1]

Quite a few Lootas are actually Deathskulls, and to this effect they will fight for their warband alongside their lighter-armed, blue-slathered brethren. It is not uncommon to find looted vehicles in Death Skull armies, such as Chimeras and Rhinos. In larger or longer engagements, Leman Russes, Predators, even Land Raiders and Baneblades will be rebuilt, Orked up, and sent back into the fray to wage war on those they once served. Deathskulls have a beef with Tankbustas because their method of waging war "ruins a perfektly good tank dat could be shootin' fer us wiv a little tweakin'".[Needs Citation]

Their symbol is the horned skull; skulls and bones are their totems.[1]