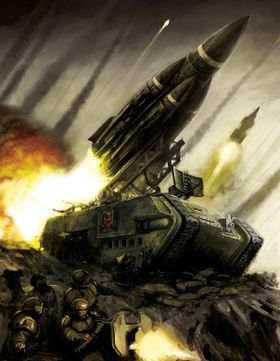 The Deathstrike Missile Launcher is an Imperial Guard artillery vehicle based on the Chimera chassis. Its ability to fire a massive payload over extreme ranges is the Deathstrike's main advantage over other artillery systems. Only ever seeing deployment during the most vicious battles, each Deathstrike missile launcher is a force multiplier whose payload causes fear in even the most experienced enemies of the Imperium.[1] The Deathstrike is designated an Ordnance Extremis by the Departmento Munitorum and requires special authorization to deploy.[5]

The Deathstrike launcher represents the largest threat offered by any mobile Imperial Guard missile system. Mounted on the Chimera chassis is a single Deathstrike Missile, an inter-continental solid fuel rocket with a range measured in thousands of kilometers. This missile can carry a variety of payloads, though by far the most common is a plasma warhead: Upon detonation these missiles can annihilate entire armies in a raging fireball that vaporises flesh in an instant. Others can carry deadly biological pathogens or specialised Titan-killer warheads, while the rarest of all are the deadly Vortex Missiles. These doomsday weapons of apocalyptic capability use Dark Age of Technology knowledge to tear holes within the fabric of reality upon their explosion, creating a warp rift which destroys everything it touches.[1]

Most of the missiles carried by Titans can be modified to be fired from the Deathstrike launcher as well.[6]

The deployment of a single Deathstrike Missile Launcher is a complicated procedure that requires a huge investment of resources and many religious and administrative rituals by the Adeptus Mechanicus and Administratum respectively. As such, the deployment can take months to complete. Moreover the large lumbering launch vehicles often require their own dedicated escort and presents foes with a valuable and soft target. For the Departmento Munitorum, simple logistics has precluded its deployment in all but the most extreme circumstances.[5]

Use of these weapons is strictly controlled, with sanction for their use controlled by Segmentum Command and the launch codes held by loyal and iron-willed Lord Commissars.[4]

Tactical Deathstrike missiles are equipped with complex robotic guidance systems allowing them to choose and pursue their own targets. When fired the missile climbs high into the air, up to where its cameras can survey the whole battlefield; the onboard computer then selects an objective and dives back to the surface. Reentry is very inaccurate, and if the missile fails to hit the target directly in its fall it will remain 10-20m above the ground, dodging terrain and incoming fire in order to reach its goal in a slow nap-of-the-earth flight. As a result the missile never misses, except when running out of fuel.[6]

The Deathstrike missile launcher finds itself an uncommon sight on the modern battlefield, as over the years the Imperium has slowly moved on to more mobile forms of artillery that are smaller and require less logistical support. Due to their size and damage potential, Deathstrike batteries are mostly used for the total obliteration of key targets or those beyond the range of conventional artillery.[1][2]

On Armageddon, Deathstrike batteries located at Hive Helsreach were frequently used to provide support for the defenders of Hive Volcanus during the Third War for Armageddon, despite the latter's location on the opposite side of the planet.[2]

During the Ork raid on Baric Six in 994.M40, a band of Lootas somehow managed to infiltrate and steal one of three Deathstrike missile launchers from the Army 52 artillery park. They would use it shortly after, resulting in the loss of two entire armoured companies of the Mordian 278th Armoured and the Baneblade "Steel Might", not to mention over a hundred surprised Orks. A dozen Imperial generals would be executed for dereliction of duty following a two-year investigation into how the launcher was stolen.[1] 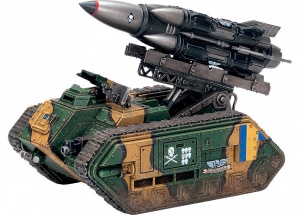 The Death Strike Missile Launcher, besides its main payload, is armed with a hull mounted weapon - either a Heavy Bolter or Heavy Flamer — and includes a Searchlight and Smoke Launchers. It may also be upgraded with Camo Netting, Dozer Blades, Extra Armour, a Hunter-Killer Missile and a pintle-mounted Storm Bolter or Heavy Stubber.[1]